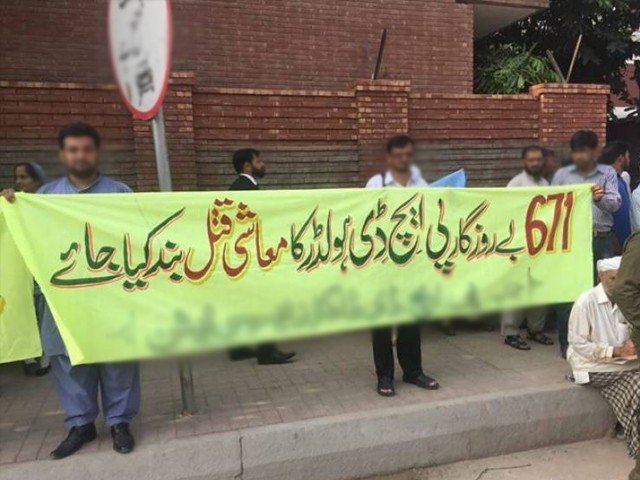 ISLAMABAD: Dozens of unemployed PhD holders fed up with joblessness have gathered outside Prime Minister Imran Khan’s Banigala residence to protest the government’s failure to provide them with proper jobs. The protest call was given by an association of PhD, aptly named PhD Doctors Association. The protesters are demanding a meeting with PM Imran Khan.
With the number of universities cropping up in the country each passing day and the demand for higher education in the country constantly on the up, one would assume that PhDs would be in high demand at these varsities to run various educational programmes. However, this appears not to be the case.
The association claims that it had 764 unemployed PhD doctors registered with it and demanded placement against jobs in the higher education sector. The PhDs scholars say they had now decided to protest outside Imran Khan’s residence to raise a voice for their just demands. The association says the previous negotiations with the Higher Education Commission of Pakistan (HEC) bore no fruit.
A demand and agenda paper had also been issued by the unemployed PhDs earlier, which stated that there were 36,000 PhDs required in universities, with a further 60,000 PhDs required across Pakistan. However, despite this shortage, the government had only succeeded in providing jobs to only a few hundred (about 700) PhD graduates. The scholars blamed the federal and provincial HECs for their situation, saying, “It is also because incompetent people are sitting on the key posts of HEC and PHEC.”
Furthermore, the document alleged that per HEC rules, the minimum criteria for establishing a department in any university was having at least five PhD faculty members, but NOCs had been issued to many universities without fulfilling this criterion.
The PhD holders’ document added that jobless scholars had been forced to turn to inferior jobs as there appeared to jobs available for BA, MSc, and MPhil degree holders, but none for fresh PhDs.
“That is why when a job for MPhil is advertised, many PhDs apply to these jobs, and ultimately, they serve on the posts for which they are overqualified,” the agenda paper added. It said that many PhDs were, therefore, working on BPS-16 and BPS-17 levels, which did not do justice to PhD graduates. The scholars were overqualified for the posts, but had no other choice but to continue working on subordinate position for want of a livelihood, it added.
The scholars said they had also had bad experiences with the private sector in form of exploitation. They said that there was a lack of implementation of rules and regulations in some HEC-recognised private sector universities. The scholars demanded that salaries for PhDs in the private sector should be made equal to the TTS salary. Furthermore, they demanded that the rule of a retired person not holding any administrative post similar to that in the public sector should also be implemented in private universities. The scholars demanded that leave rules and job security, as provided in government-run varsities, should also be ensured in the private sector.