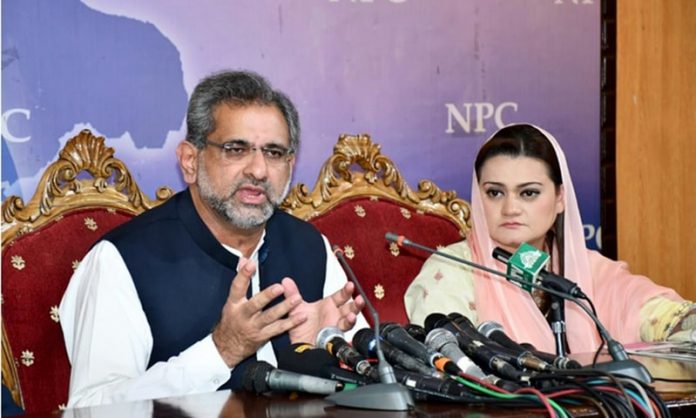 ISLAMABAD: Former prime minister Shahid Khaqan Abbasi says accountability court judge Arshad Malik is “making up stories” to save himself.
He was referring to a controversial video clip shown by the PML-N in an explosive press conference last week and the judge’s letter and statement submitted on the Islamabad High Court in his defence in the video case.
The party’s vice president, Maryam Nawaz, had said that judge Malik was blackmailed into convicting her father, Nawaz Sharif, without any evidence and had admitted that. According to her, judge Malik called PML-N leader Nasir Butt to his house himself to clear his conscience and she showed a video clip from their meeting.
But judge Malik says that video clip is not representative of their conversation. He said it was cut and edited and was not reflective of what he said. He also said that the PML-N, more notably Nawaz’s family, tried to bribe him during his trial and when he didn’t cooperate, they threatened him.
Abbasi says Malik hasn’t denied the content of the controversial video clip, but said it was taken out of context.
The judge issued a press release a day after Maryam Nawaz’s press conference and he didn’t deny the content of the story, Abbasi said in Islamabad on Saturday.
“He only said that his conversation was taken out of context,” the PML-N leader said.
In a statement in the Islamabad High Court on Friday, judge Malik said that he was appointed as an accountability judge in February, 2018. Malik claimed that Nasir Janjua, in a social setting, told him that he was appointed on the “specific and personal recommendation” of Nawaz Sharif.
Judge Malik’s statement came a few days after Maryam claimed that the judge was blackmailed into convicting her father without any evidence and he admitted to it.
The judge also claimed that Nasir Janjua tried to bribe him.
However, Abbasi believes that judge Malik is “making up stories” to save himself.
Nawaz Sharif’s trial was monitored by a Supreme Court judge, Abbasi said, questioning why judge Malik didn’t inform the SC judge if he was being pressured to acquit Nawaz Sharif.
Abbasi categorically denied knowing Nasir Janjua. “I never met Nasir Janjua,” he had said earlier.
Janjua has been seen and pictured with Nawaz Sharif on more than one occasion. He is an Islamabad-based businessman, who owns a construction company.
On May 23, Janjua had a one-on-one meeting with Nawaz Sharif inside Kot Lakhpat Jail which lasted for 45 minutes.
According to sources, several PML-N leaders were also present at the jail on May 23 but they were made to sit outside the meeting room. …Agencies