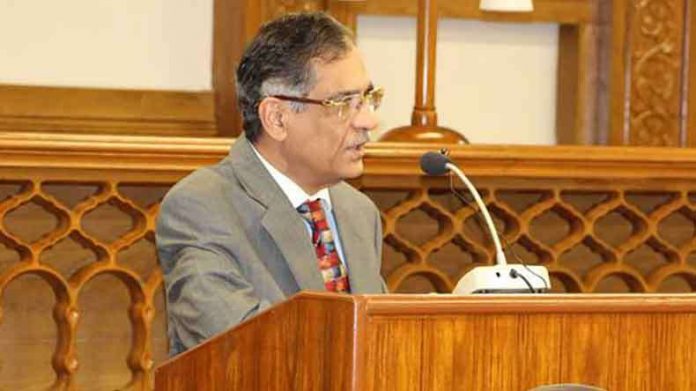 LAHORE: Chief Justice of Pakistan (CJP) Saqib Nisar Saturday rejected perception regarding pressure on judiciary and said that the judiciary was neither part of any plan nor would become part of any plan in future.
While addressing a seminar in Lahore, the Chief Justice said that the judiciary takes decision independently without any pressure. He said on oath that he did not know that the other bench of the Supreme Court was going to announce decision in Hudaibya paper mills case the same day.
He said that the judiciary is working for democracy and constitution and would protect the constitution.
The chief justice said that the judges make decisions with honesty stated that no one should abuse judiciary if the verdict comes against him/her because judiciary is like an elder of the country.
“We give verdict without any pressure. There is no external plan of any kind,” said CJP . “No one can pressurize the judiciary .”
“Each verdict we have given are according to law and constitution,” he maintained.
Nisar emphasized that democracy and rule of constitution is the only way for progress and stability of Pakistan and judiciary will never let it down.
“If there would have been any external pressure then verdict will not be this,” he asserted. “I have ruled that no verdict should be given not late then one month hence I decided the date which coincidentally came on same day of Hudaibiya case.”
He also mentioned that everyone starts criticizing the verdicts without reading or analyzing them which is a major issue.