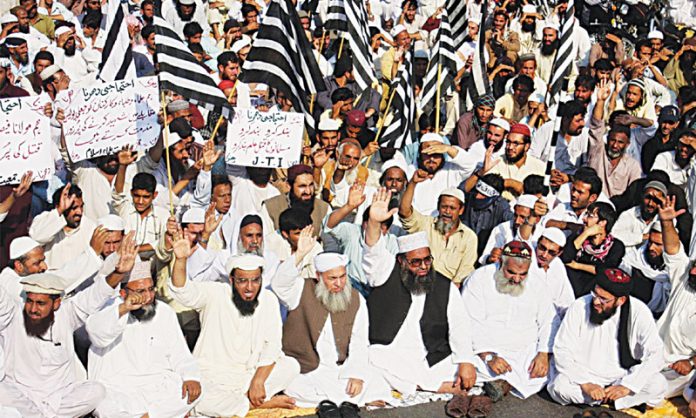 KARACHI: Jamiat Ulema-i-Islam-Fazl (JUI-F) leadership in Karachi has agreed to end their sit-in on Thursday after successful negotiations with Sindh government officials.
Party leader Maulana Rashid Mehmood while talking to media said that the provincial government has accepted their demands, therefore, they were ending their sit-in.
Earlier, the participants of the rally staged a sit-in at the Tibet Center after starting from Numaish Chowrangi.
Strict security measures were in place at the CM house where the police were deployed and containers were placed to prevent rally participants from entering the Red Zone.
The rally participants had come up with two demands: send JUI-F leader Khalid Soomro’s murder case to the military courts and prevent registration of madressahs in Sindh.
Sindh Chief Minister Murad Ali Shah gave directives to try JUI-F leader Khalid Soomro’s murder case in military courts.
The Sindh government will write a letter to the federal interior ministry today, advisor to the provincial law minister said.
Political and military leadership attending an apex committee on Wednesday resolved to take measures to register seminaries across the province.
Khalid Soomro was shot dead on November 2014 in Sukkur when he was leaving a mosque after offering Fajr prayers.