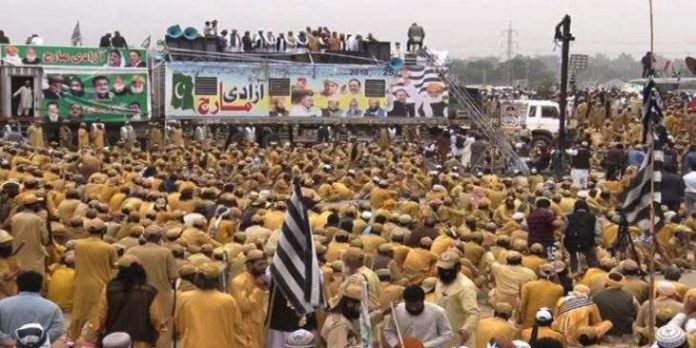 ISLAMABAD: A meeting of the Jamiat Ulema-e-Islam-Fazl (JUI-F) chaired by chief Maulana Fazlur Rehman, has finalized Plan B of the Azadi March, and will likely close all the main roads across the country.
According to details, it has been decided to block the main roads of the country while continuing the sit-in. Maulana Fazlur Rehman has started consulting with other opposition parties before the final announcement. The final announcement is likely to be made at today’s meeting.
Meanwhile, Akram Durrani while speaking outside the National Accountability Bureau (NAB) court, and Rashid Soomro expressing outside the Maulana‘s residence said Plan B is about to be announced. Maulana Fazlur Rehman has begun consulting with other opposition parties to gain their confidence in JUI-F’s final decision. “Chairman National Party Mir Hasil Bizenjo has assured full support in meeting Maulana Fazlur Rehman”, they added.
Earlier, JUI-F chief chaired key meeting of the party leaders to discuss his ongoing sit-in in the federal capital, Islamabad.
According to details, senior JUI-F leaders from all the provinces and other party members attended
the meeting. The participants presented their strategies on Plan-B to hold countrywide protests against the government