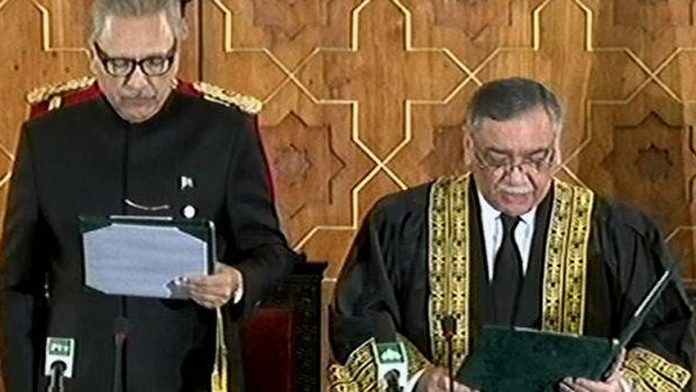 ISLAMABAD: Justice Asif Saeed Khosa on Friday has taken oath as Chief Justice of Pakistan (CJP) during a ceremony at Aiwan-e-Iqbal in Islamabad.
President Dr Arif Alvi administered oath to the 26th CJP.
All federal ministers, chiefs of armed forces, high-level judges and prominent personalities from abroad were also present on the occasion. Prime Minister (PM) Imran Khan also attended the ceremony.
Born on Dec 21, 1954, in Dera Ghazi Khan, Justice Khosa passed his matriculation exam in 1969 from the Multan Board. In 1973, he appeared for the B.A exams from Government College Lahore at Punjab University and secured first position. Justice Khosa did his masters in English Language and Literature at the University of the Punjab in 1975.
Then Justice Khosa attended Queens College at the University of Cambridge, obtaining a Masters degree in law with a specialisation in International Public Law. Later, he went on to become a barrister at law on July 26, 1979, at the Honorable Society of Lincoln’s Inn in London.
He enrolled an advocate of the Lahore High Court (LHC) on November 13, 1979 before enrolling as an Advocate of the Supreme Court on September 12, 1985. Justice Khosa has handled thousands of cases pertaining to constitutional, criminal, civil, service, revenue and election laws as an advocate of the SC and HC apart from writing a few books as well.
Barrister Khosa was appointed as a LHC judge in May 1998. On Nov 3, 2007, Justice Khosa refused to abide by former president General (retd.) Musharraf’s presidential order declaring a state of emergency after suspending the constitution and demanded judges of the superior judiciary to retake oaths under the Provisional Constitutional Order (PCO).
On August 18, 2008, Justice Khosa was restored to his position as a HC judge in the wake of an unprecedented mass movement to restore the superior judges sacked for not retaking their oaths under the PCO.
Justice Khosa was part of the seven-member larger bench of the SC which heard the contempt of court proceedings against the former prime minister Yousaf Raza Gillani.
Justice Khosa also headed the larger bench of the SC that heard the Panama Papers case against deposed prime minister Nawaz Sharif and his family.
Justice Khosa also passed several remarks that attracted public attention while hearing a case against Asia Bibi, a Christian woman falsely accused for passing blasphemous remarks against The Holy Prophet (PBUH). A three-member bench of the SC unanimously acquitted Bibi on October 31, 2018.