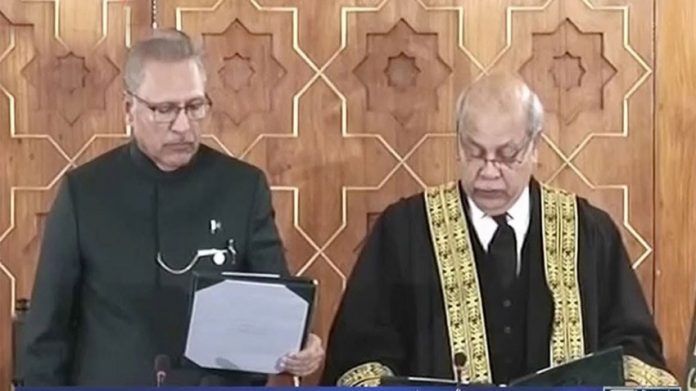 ISLAMABAD: Justice Gulzar Ahmed has taken oath as the 27th Chief Justice of Pakistan (CJP) and will serve till Feb 21, 2022.
In a ceremony held at Aiwan-e-Sadr, President Dr Arif Alvi administered the oath to Justice Ahmed, who has replaced Justice Asif Saeed Khosa as the chief justice.
Prime Minister Imran Khan, Chief of Army Staff Gen Qamar Javed Bajwa, National Assembly Speaker Asad Qaiser, Senate Chairman Sadiq Sanjrani and other ministers and officials were in attendance.
On Dec. 4, the Law Ministry had issued a notification of Justice Gulzar Ahmad’s appointment as the new CJP. His appointed was approved by President Arif Alvi.
The notification issued by the law and justice secretary stated: “In exercise of the powers conferred by Clause (3) of Article 175 A, read with Article 177 of the Constitution of the Islamic Republic of Pakistan, the President is pleased to appoint Mr Justice Gulzar Ahmed, the most senior judge of the Supreme Court, as Chief Justice of Pakistan with effect from December 21, 2019.”
Justice Ahmed, who was part of the five-judge bench that disqualified former premier Nawaz Sharif in the Panama Papers case, is also a member of the Supreme Judicial Council and Judicial Commission of Pakistan.
His strict action during suo motu proceedings regarding Karachi led to a massive anti-encroachment and cleanliness drive by the metropolitan authorities, though it also created some consternation among the people.
Justice Ahmed was born on February 2, 1957, in Karachi to the family of Noor Muhammad, a distinguished lawyer. His elementary schooling was from the metropolis’ Gulistan School, according to the Supreme Court website. He then went on to earn a Bachelor of Arts degree from Government National College, Karachi following which he obtained his law degree from S.M. Law College, Karachi.
He enrolled as an advocate on January 18, 1986, and joined the High Court on April 4, 1988. Subsequently, he became an advocate of the Supreme Court on September 15, 2001. He was sworn in as a Sindh High Court judge on August 27, 2002.
It is pertinent to mention here that he had a prolific judicial career, and was the honorary secretary of the Sindh High Court Bar Association in Karachi for the year 1999-2000.
Justice Gulzar also attended “18th Intensive Study Programme for Judicial Educators” conducted by Commonwealth Judicial Education Institute, Canada held on 5-24 June, 2011 with sessions at Halifax, Ottawa and Toronto, Canada and conferred Fellowship by the Institute.
He was notified as Senior Puisne Judge of the High Court of Sindh on 14th February, 2011 and was elevated as Judge of the Supreme Court of Pakistan on November 16, 2011. He attended “International Judicial Conference” as Co-Chair for thematic group “Parental Child Abduction & Transnational Jurisdiction” held on 19-21 April, 2013 at Islamabad.
Throughout his legal practice, he mostly remained on the civil-corporate side, serving as the legal advisor to numerous multinational and local companies, banks and financial institutions.