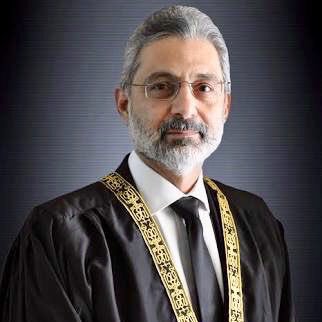 ISLAMABAD: The wife of Supreme Court judge Justice Qazi Faez Isa has filed an application for an FIR to be registered against a man who has threatened her husband.
In her petition filed to the SHO of the Secretariat police station Sarina Isa has said the man, whom she tentatively identified as Agha Iftikhar-ud-Din Mirza, threatened Justice Isa’s life. She enclosed a USB with a video of the threat.
In the petition she quoted the man as saying “whoever is caught involved in embezzlement, even if he’s [Justice Qazi] Faez Isa…should be put before a firing squad”. He also called for the public hanging of “people like this” and said the whole city should be called to watch it.
“Call them to Fawara Chowk to see that such and such man is being shot,” he said in the video.
Sarina Isa said she found his name via an internet search but did not know if it was his real name. She asked the police to look into this further.
“As you must know, many powerful people are not happy with my husband and I suspect that this death threat to my husband is in continuation of what we have been facing,” she wrote. Justice Isa became the centre of a Supreme Court trial after a presidential reference was filed against him for concealing the assets of his wife and adult children. He has argued that they were not his dependents and therefore he had no need to declare their assets. To read a full timeline of his case, click here.
On June 19, the Supreme Court quashed the government’s reference against Justice Isa and declared the show-cause notice issued to him null and void. It ordered the Inland Revenue commissioner to issue appropriate notices to the judge’s family and children under the Income Tax Ordinance, 2001 within seven days.
In her application, Sarina Isa referred to the complaint submitted against her husband by “some” Abdul Waheed Dogar, adding that they did not know who he was but he had held meetings with PM’s aide Shahzad Akbar at his office at the Prime Minister’s Secretariat.
“Threatening to murder a judge of the Supreme Court of Pakistan is the worst kind of terrorism. Many powerful people want to get rid of my husband and it is your duty to find out who they are and to arrest them,” she plead.