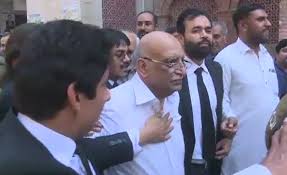 LAHORE: The Accountability Court (AC) in Lahore on Monday has extended the judicial remand of Punjab University former vice chancellor Dr. Mujahid Kamran and others till November 20, in alleged illegal appointments in the campus.
Mujahid Kamran and others were produced before Accountability Court in Lahore. Hearing the case, AC Judge Justice Najmul Hassan approved extension in judicial remand of the accused till November 20.
Earlier, on October 23, AC in Lahore had sent PUformer vice chancellor Dr. Mujahid Kamran along with other six to jail on 14-day judicial remand after 10-day physical custody by NAB.
On October 12, the AC had handed over Mujahid Kamran with other accused to NAB on ten days physical remand.
Mujahid was arrested, along with five other colleagues over involvement in a case pertaining to alleged illegal appointments in connivance with ex-registrars of university during his two consecutive terms by virtue of extension awarded to him.