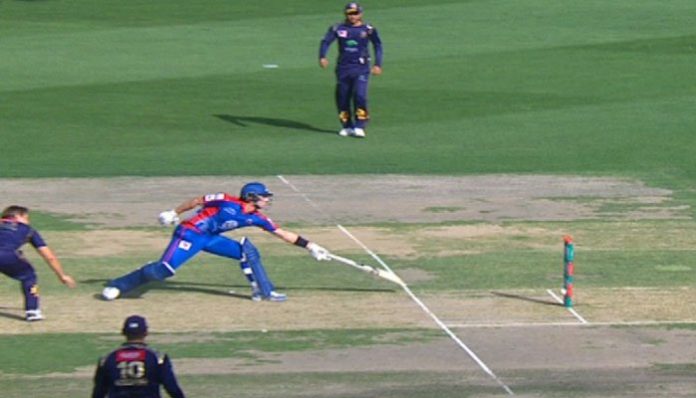 DUBAI: Karachi Kings started their PSL 2018 campaign on a winning note by beating Quetta Gladiators convincingly in today’s first match at the Dubai International Cricket Stadium.
Karachi successfully defended their target of 150, restricting Quetta to 130-9 to claim a 19-run victory in their season opener.
Defending a modest 150-run target Karachi Kings needed wickets to pull off a winning start to the third edition and they did exactly what the analysts had summed up. Skipper Imad Wasim (2-19) chipped in with key wickets of Asad Shafiq (2) and Rilee Rossouw (18) to push Quetta on the back foot at 45-4.
Then, much to the joy of crowd, Afridi came into acts. He dismissed Quetta skipper leg before for seven and then sent a dangerous Umar Amin (31) back with a stunning catch. Amin had hoisted pacer Mohammad Irfan to long-on where Afridi jumed high and took a right handed catch, realizing that he could go out of the ground he threw the ball up and completed the catch by re-entering the ground.
The catch made the crowd as well as the Karachi Kings entourage in the royal box ecstatic.
But Karachi Kings still had to fight hard to finish the game as Mohammad Nawaz (30 off 20 balls with three fours and a six) and Hasan Khan gave them a scare through a 43-run seventh wicket stand.
Tymal Mills (2-27) and Mohammad Irfan (2-36) also chipped in with useful wickets.
Karachi Kings, who won the toss and batted, could not pile up a big total.
Colin Ingram hit a fast 21-ball 41 with five boundaries and two sixes but Karachi Kings hard hitters like Shahid Afridi and Imad Wasim failed to give the impetus to the innings. Only 38 were added in the last five overs with Afridi making only four and Imad two.
Karachi Kings were off to a good start of 34 as both Khurram Manzoor (39-ball 35) and Joe Denly (14) were stedy. Denly was unlucky to get out after showing hint of acceleration.
Twenty20 cricket’s top batsman Babar Azam did disappoint as he never looked in command, scoring 10 off 12 balls before edging Rahat Ali behind the wicket.
Khurram and Ingram did pace up the innings, adding 26 for the third wicket as Karachi were 111 after 15 overs. Khurram holed out after managing just two boundaries. Ingram hit five boundaries and two sixes.
Lahore Qalandars take on Multan Sultans in the second match of the day.