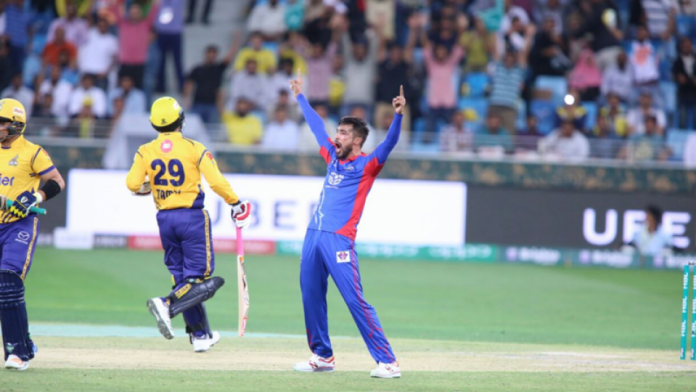 DUBAI: Karachi Kings defeated Peshawar Zalmi by five wickets with only two balls to spare in a low-scoring match to maintain their perfect record in PSL 2018 here at the Dubai International Cricket Stadium on Sunday.
Karachi Kings have completed their second consecutive victory in the seventh match of Pakistan Super League 2018 by defeating Peshawar Zalmi to go top of PSL 2018 points table.
While batting first after winning the toss, Peshawar’s players could not stay on the wicket as they were out to poor shots. They gifted three run-outs wickets to Karachi Kings who significantly bowled to restrict them to 131. While Dwayne Smith was the only one who played a sensible inning, adding 71 from 51 balls with five sixes and four boundaries to Peshawar’s 131.
Openers Tamim Iqbal (11) and Kamran Akmal (14) were the only two other batsmen to get into the double figures.
Karachi Kings kept the pressure up on the opponents with a superb effort in the field. Once Kamran was dismissed in the second over, Kings brilliantly maintained their performance with the ball, pushing Peshawar Zalmi on defensing approach.
M Amir was magnificent, did not allow Peshawar’s batsmen to play big shots.
Mohammad Amir and Shahid Afridi claimed two wickets each while pacers Mohammad Irfan and Tymal Mills took one wicket each for Karachi Kings.
Knowing the run rate wasn’t going to be an issue, Karachi Kings preferred to keep wickets in hand, Babar Azam, Colin Ingram and Joe Denly kept Karachi on course, in the last Imad Wasim, the captain himself smashing the last ball for six to secure the victory.
Earlier on the day, Islamabad United achieved their first victory defeating unbeaten Multan Sultans by five wickets in their second match in the third edition of the Pakistan Super League.