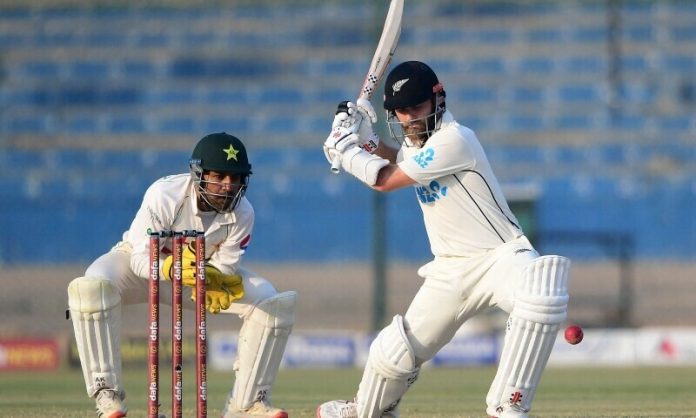 New Zealand ended the third day at 440 for the loss of six wickets on Wednesday, two runs ahead of Pakistan’s first innings total of 438 runs.

Kane Williamson finished the day, not out on 105, as he scored his 25th Test century.

Earlier, in the third session, Pakistan’s pacer Muhammad Wasim got his first wicket of the innings when he dismissed wicket-keeper batter Tom Blundell LBW for 47.

Second session
After the Lunch break, Pakistan got the first breakthrough soon, as Henry Nicholls inside edge the ball into the wickets and was bowled by Nauman Ali after scoring 22 runs.

Daryl Mitchell batted aggressively and hit seven fours and one six before getting dismissed by Abrar Ahmed for 42 runs off 47 balls.

First session
New Zealand were 245-2 against Pakistan on Day three of the Karachi Test match on Wednesday, as Tom Latham scored a century whereas other opener Devon Conway got out in nervous nineties.

The visitors started the third day for 165 without any loss. Devon Conway was on 92 when Pakistan took a review for an LBW and Nauman Ali got his wicket.