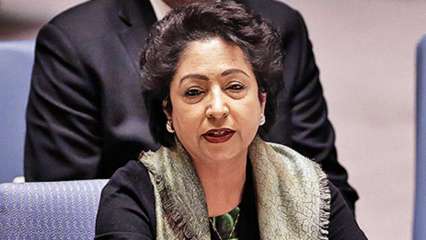 NEW YORK: Pakistan’s Permanent Representative to the United Nations (UN) Dr. Maleeha Lodhi on Saturday said that Kashmir dispute should be resolved as per the charter of the UN and added that the Kashmiris’ struggle for the right to self-determination was part of that charter, Khyber News reported.

Talking to a private news channel, Maleeha Lodhi said that India committed violations of the UN resolutions on Kashmir, besides sabotaging peace efforts made by Pakistan for the regional peace. She said, “Step by step diplomacy is being put in place to address the long-standing issue of Kashmir.” Responding to a question, Lodhi said that western media and the general public criticized India for grave human rights violations and stripping the occupied valley of its special status through a presidential decree.

Earlier in the day, thousands of Kashmiris had protested against Indian forces in Occupied Kashmir despite a curfew after India stripped the occupied valley of its special status through a presidential decree, a video tweeted by BBC South Asia had shown on Saturday.BBC South Asia Bureau Chief Nicola Careem had shared a video on micro-blogging website Twitter showing how people in the Occupied Kashmir are protesting against the Indian move and are bravely facing Indian forces in the region.