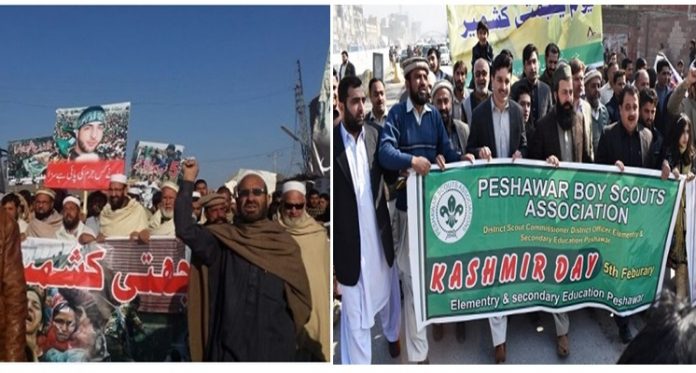 GHALANAI/BARA/PESHAWAR: The people of Mian Mandi Bazaar in Mohmand Agency and Bara subdivision of Khyber Agency have pledged to stand with the people of Indian held Kashmir (IHK) saying they would not leave IHK alone.
Mohmand Welfare Organization organized a march in connection with the Kashmir Solidarity Day being observed today, in which people were holding placards and banners inscribed with anti-Indian slogans.
They demanded that Pakistan should cut off diplomatic relations with the United States, India and Israel.
The tribal people also chanted slogans “Kashmir Banay Gaa Pakistan” [Kashmir to become Pakistan].
Addressing the march, speakers said that the tribal people have rendered matchless sacrifices for Kashmir adding that Kashmir belonged to them in the future.
Former member national assembly (MNA) Haji Muhammad Shah Afridi, Bara subdivision Tehsildar Riaz and Bara subdivision business community president Syed Ayaz Wazir headed the march.
Meanwhile, the district administration of Peshawar and provincial education department arranged a ceremony in connection with the Kashmir Solidarity Day here in Government Shaheed Osama Zafar Model Higher Secondary School No. 2 on Monday.
Additional Deputy Commissioner Shahid Ali Khan, District Education Officer Jadi Khan Khalil, Principal Jehangir Khan and a large number of people from different walks of life attended the meeting wherein District Nazim Muhammad Asim Khan was the chief guest.
Addressing the ceremony, the speakers said that Kashmir was jugular vein of Pakistan and the Kashmiris struggle of freedom from Indian would turn out to be fruitful.
Meanwhile, District Nazim Asim Khan said that the people of Kashmir wanted to accede to Pakistan due to which the Indian troops have crossed all limits of atrocities in the valley.
He added that they would never leave the people of Kashmir alone.