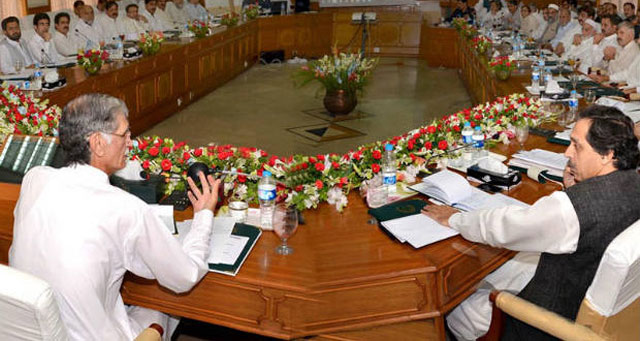 PESHAWAR: The provincial cabinet of Khyber Pakhtunkhwa Tuesday approved amendments in the Women Harassment Act 2010 and allocation of Rs. 23 billion for priority projects in the province.
The meeting of the provincial cabinet held in Chief Minister’s Secretariat with KP Chief Minister Pervez Khattak in the chair. Provincial Ministers, Chief Secretary Muhammad Azam Khan, Additional Chief Secretary and administrative secretaries attended the cabinet meeting that took for debate a 16 points agenda and made a number of decisions for improved governance, tackling the governance related issues, the regularization of contractemployees recruited through NTS etc.
The Chief Minister in consultation with the provincial cabinet elevated Advisors to Chief Minister Ishtiaq Urmar and Mushtaq Ahmad Ghani to status of the full provincial ministers on their impressive performance in their respective departments. The cabinet directed the Information Department for a comprehensive communications approach in its overall functions with focus on innovative publicity centric mechanism.
The provincial cabinet agreeing to the amendments in the Women Harassment Act 2010 at work places, approved the recruitment of an Ombudsperson to address to the genuine grievances of women at work place. This enactment would give protection to the women at work place. The amendment made in the act would be tabled in the provincial assembly for proper legislation. The cabinet also agreed to the regularization of 36278 number of NTS recruited teachers and other employees throughout the province. The regularization of the employees would be made through an act of the provincial assembly.
The Chief Minister agreed to the strengthening of Excise & Taxation department and the cabinet approved the revenue collection through the Excise and Taxation department. The department under the cabinet decision would be empowered to collect Abiana and other revenue. Earlier, the KEPRA had to collect revenue and after the amendment this function would be transferred to the Excise & Taxation department.
The cabinet okayed additional Rs. 23.930 billion for the priority projects of public welfare oriented nature throughout the province that included Rs. 4 billion for Khyber Pakhtunkhwa Highway Authority, Rs. 5 billion for Communication & Works projects, Rs.1billion and 30 million for solarization schemes, Rs. Two billionfor irrigation projects, Rs.1 billion for higher education projects, Rs. One billion for secondary education, Rs. 2 billion for irrigation, Rs.1billion and 600 million for electricity related projects and Rs.300 million for Sui gas related projects.
The Chief Minister directed to develop the prime property of Auqaf Department on commercial lines in order to enhance the resource base of the department adding that the whole commercialization process should be a transparent one and the process should be completed on accelerated pace, he added.– APP