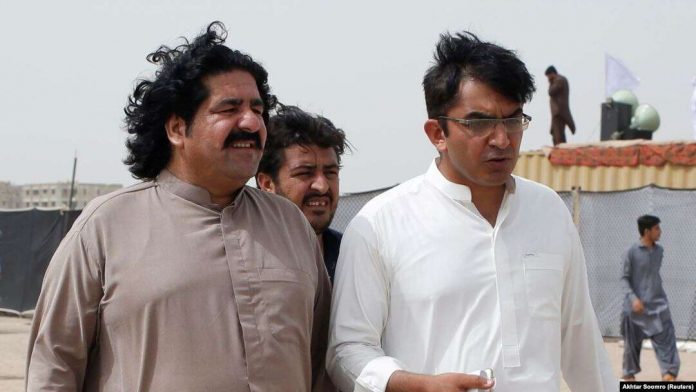 BANNU: The Khyber Pakhtunkhwa government wants to withdraw the case pertaining to a clash at a Kharqamar military checkpost against Pashtun Tahaffuz Movement (PTM) leaders and workers.
An FIR was registered at the Counter-Terrorism Department (CTD) Police Station, Bannu Range, against multiple PTM workers for allegedly attacking a military checkpost at Kharqamar in North Waziristan on May 26 last year. Thirteen people were killed and multiple were injured in the clash.
Senior PTM members and MNAs Mohsin Dawar and Ali Wazir were nominated in the case along with others under different sections of the Pakistan Penal Code, Maintenance of Public Order Ordinance and Section 7 of the Anti-Terrorism Act.
According to media reports, an application has been filed in a Bannu anti-terrorism court on March 16, saying that the government wished to withdraw the case, which was being heard in Abbottabad due to security reasons. The application was filed on behalf of the state through Bannu district public prosecutor and ATC Bannu’s senior public prosecutor.
“The state/government as per instructions of the provincial government with reference to the prevailing situation, we intend to withdraw prosecution of the subject case,” the application read.
The legal representative of Dawar and Wazir, Abdul Latif Afridi, who is a senior lawyer and president of the Peshawar High Court Bar Association also confirmed the move but said that his clients are yet to receive a copy of the application filed by the government.
Last month, the group accepted the government’s offer for talks but called for confidence-building measures (CBM) to demonstrate sincerity. In a press conference last month, PTM chief Manzoor Pashteen had said that the government must take steps to bridge the trust deficit, adding that it was customary for parties to take CBMs before entering into talks.