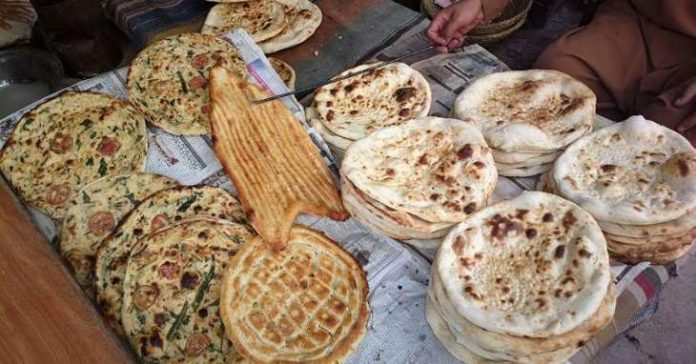 PESHAWAR: The Khyber Pakhtunkhawa government has decided to form a committee to resolve the issue of the price and weight of naan, the staple flatbread consumed by millions across the country.
The district administration had approved a 50% increase in the price of naan from Rs10 to Rs15 with the condition of increasing its weight from 150 grammes to 190 grammes.
KP Information Minister Shaukat Yousufzai said the provincial government had approved Rs2 increase in the price of naan from Rs10 to Rs12 at the current weight.
The district administration has apparently exceeded its mandate, the minister said. Fixing the weight and price of naan at 190 grammes a piece for Rs15 was solely a decision of Peshawar DC and would be reviewed by a committee.
Regarding the demand of the nanbais to increase the rates of roti he said the FBR’s decisions have no effect on the flour prices. However, increasing prices of naan on the pretext of increase in gas tariff could be considered, the minister said adding a committee has been formed to look into the matter.
Meanwhile, a petitioner has challenged the prices of the bread in the province in the Peshawar High Court on Saturday. He has made KP chief secretary, the provincial government and nanbai associations respondents.
The Nanbai Association a representative body of bread makers has refused to sell naan weighing 190 grammes for Rs15.
The 50% increase in naan price from Rs10 to Rs15 was approved by the Peshawar Deputy Commissioner Muhammad Ali Asgar with the condition of increasing the weight of the staple flatbread from 175 grammes to 190 grammes.
They want to sell a roti weighing 175 grammes for Rs15, saying they will increase the price, not the weight.
Addressing a press conference in Peshawar Press Club on Saturday the Nanbai Association President Muhmamad Iqbal said the government should revisit the directives issued for fixing the official weight and price of naan.
Iqbal, representing thousands of people who make and sell flatbreads from earthen ovens or tandoors, said the government should give subsidy on gas and flour for nanbais in the province.
“We reject the weight and price fixed during the meeting with DC Peshawar,” Iqbal said.
While the district administration has started crackdown against the bread makers who are selling bread below the fixed weight of 190 grammes and arrested over 22 bread makers in the provincial capital only.
On the directives of the DC Peshawar Muhammad Ali Asgar crackdown was conducted in Hayatabad, Kohat Road, Warsak Road, University Road and the walled city of the Peshawar where police hauled away 22 nanbais to lockups of respective precincts.
Meanwhile, people have shown resentment over the 50 per cent price hike province and demanded the bread makers and district administration reconsider their price list for the welfare of the public.
Most of the shops in the provincial capital were remained closed over the weight issues directed by the DC Peshawar, while the public has also remained refrained to buy bread at Rs15.