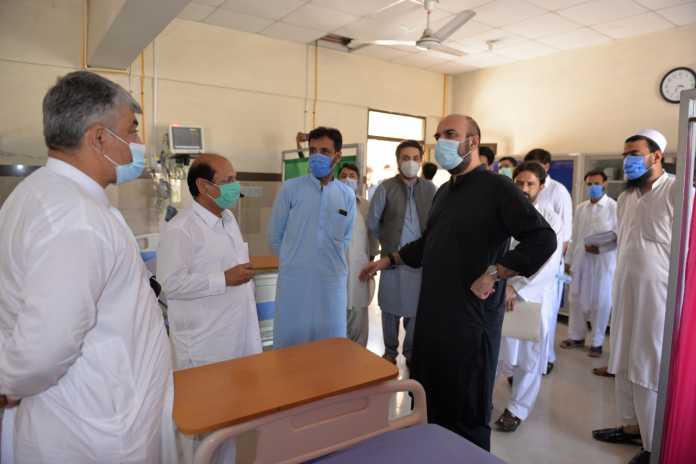 PESHAWAR: Khyber-Pakhtunkhwa (K-P) Health Minister Taimur Khan Jhagra said the province is using the opportunity to scale up preparedness for any second surge of Covid-19 cases, despite the decrease in cases.
The health minister said a 50-bed intensive care unit/high dependency unit is now operational at the Women and Children Hospital Charsadda, increasing the capacity for the district.
He added that the facility is being expanded in collaboration with the federal government and an additional 100-bed unit will be made operational in August.
The National Command and Operation Centre (NCOC) reported 3,387 new cases in the 24-hour period, taking the nationwide tally to 225,283.
In the last 24 hours, Pakistan reported 11,469 recoveries and 68 more deaths. The country’s death toll stands at 4,619.
Khyber-Pakhtunkhwa has reported another 19 deaths to bring its death toll to 1,002.
Seven fatalities were reported from Peshawar, four in Dir Lower, three in Abbottabad, two in Malakand, and one each in Chitral Lower, Bajaur and D I Khan.
Health officials also reported 336 new cases, taking the total to 27,506.
Another 805 patients recovered in the past 24 hours, taking the tally to 15,520. A total of 156,253 tests have been conducted in the province so far.