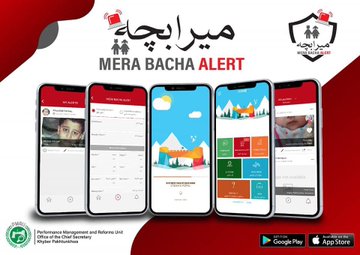 PESHAWAR: Khyber Pakhtunkhwa Chief Minister Mahmood Khan on Thursday launched the “Mera Bacha Alert”, a mobile phone application developed to help people and relevant departments in recovering missing children in the province.
The app was launched at a ceremony at the chief minister’s secretariat with advisor to the chief minister on merged districts and provincial government spokesperson Ajmal Wazir, IGP Naeem Khan, PMRU Director Muhammad Fawad and others in attendance at the ceremony. 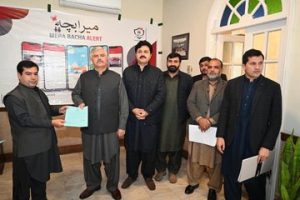 The application is a recent addition to the already available Khyber Pakhtunkhwa Citizens Portal and would also be included in Pakistan Citizen Portal.
Speaking on the occasion, CM Khan appreciated the efforts of Performance Management and Reforms Unit Khyber Pakhtunkhwa in developing the application and said it would not only help recover the missing children but would also help discourage unpleasant incidents regarding children in the province.
“It is a priority of the government to ensure protection of children. ‘Mera Bacha Alert’ application is a golden step in this regard,” he said.
The chief minister was also briefed in details about the preparation of the application, its mechanism and features. It was told that the idea of the application came in reaction to various cases of child abuse.
The application will provide complete mechanism for parents to register a report if their child goes missing. They will be able to add a picture of missing child along with his/her attributes.