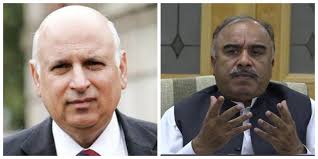 PESHAWAR: Pakistan Tehreek-e-Insaf (PTI) leaders Shah Farman and Chaudhry Sarwar will take oath as Khyber Pakhtunkhwa and Punjab governors respectively today (Wednesday).
Sarwar previously served as the Punjab governor during Pakistan Muslim League-Nawaz’s government in 2013. However, he resigned in 2015, before joining PTI, citing ‘he was not successful in solving the problems of people’.
Moreover, PTI’s Shah Farman will also take oath today as the 32nd governor of Khyber Pakhtunkhwa.
Chief Justice of the Peshawar High Court Justice Waqar Ahmad Seth will administer the oath to the new KP governor.
KP chief minister’s Mahmood Khan and Corps Commander Peshawar Lt General Nazir Ahmed Butt will attend the oath-taking ceremony.
Both the governors will take oath at 3pm.
The oath-taking ceremony of the governors was earlier postponed due to the presidential election taking place in the country.