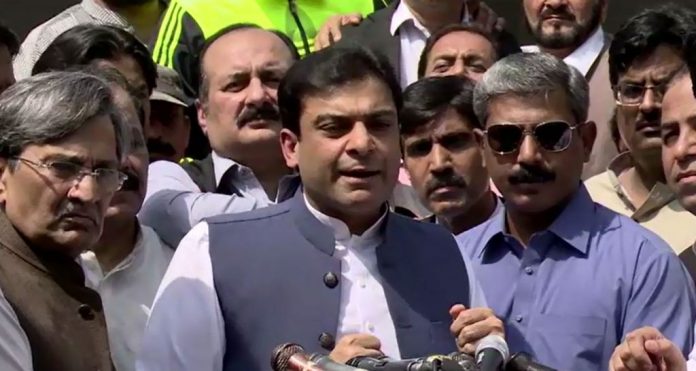 LAHORE: The Lahore High Court (LHC) pn Monday extended Hamza Shahbaz’s pre-arrest bail till April 17 and restrained the National Accountability Bureau (NAB) from arresting him for cases pertaining to ownership of assets beyond means and money laundering.
The high court also ordered him to pay surety bonds worth Rs10 million and issued a notice to NAB seeking its reply in the matter.
A NAB team seeking Hamza’s arrest was embroiled in a nearly five-hour-long standoff with his private security and supporters at his family’s Model Town residence on Saturday. It was the second day in a row that the NAB had approached his residence for his arrest. The stalemate ended once the LHC restrained the bureau from arresting the MPA and granted him protective bail until April 8.
Hamza Shahbaz is being represented by Advocate Amjad Pervez before the two-judge bench. A team of the bureau’s legal experts are also in the courtroom.
PML-N workers at the Lahore High Court, armed with banners, chanted slogans in Hamza’s favour until they were warned by security that they would be expelled from the premises if they did not show respect for the court. They continued a silent show of support for their leader thereafter.
Justice Malik Shahzad, taking note of the large gathering, remarked: “So many people have been called here today. What is all this?”
Hamza replied that he had not called the PML-N workers.
“What will happen in the future if such sloganeering has already begun?” Justice Mirza Waqas Rauf asked.
The court asked NAB’s lawyer which case the bureau wanted to arrest the PML-N leader in, to which he replied that there are a total of three cases against Hamza and they wanted to arrest him in the case pertaining to assets beyond means.
The lawyer added that arrest warrants in the Ramzan Sugar Mills and the Saaf Pani Company cases had not yet been issued.
The NAB prosecutor asked for an early date but Justice Shehzad Malik said the case against Hamza is still at the notice stage. NAB argued that it has four cases against Hamza and has done everything according to the law.
One of the cases against him is of owning assets beyond his known means of income.
According to NAB, the Supreme Court ruled that it no longer has to tell suspects before their arrest warrants are issued but the high court said the bureau could not arrest Hamza without informing him first.