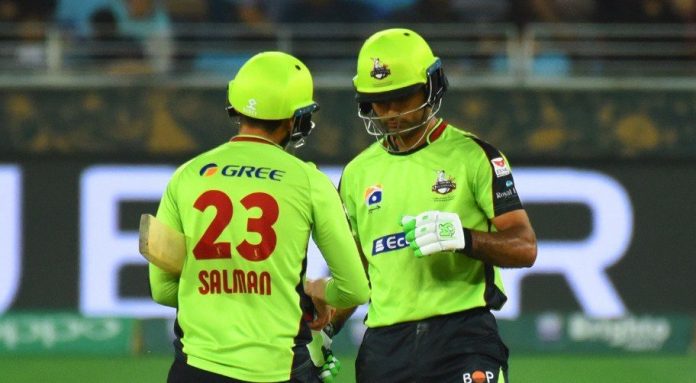 DUBAI: It’s the second time in the PSL history that super over was played to decide the fantastic contest as the 24th 20-over thriller between Karachi Kings and Lahore Qalandars was a tie here at the Dubai International Cricket Stadium on Sunday.
Undoubtedly, it was the match of the tournament that fully kept the fans in the game as unbelievable scenes and confusion were everywhere, finally Qalandars won the match after a sensational contest against Kings, as Narine restricted Karachi batsmen to 8 with his magnificent deliveries in Super Over to defend 12 runs target.
At one stage it seemed as Karachi kings won the game when the Qalandars required 2 runs from 1 ball and the batsman was caught on the boundary on that last delivery, but dramatically it was not a legal delivery and a Free Hit was given to Qalanadars who leveled the score and Super Over was played.
After being sent into bat, Karachi Kings set a target of 164 Qalandars as brilliant fifties from Lendl Simmons and Babar Azam steered Karachi Kings to a good total.
Karachi Kings lost their in-form opener Joe Denly at 19 runs on the board but Simmons and Babar rescued the team adding 72 runs for the second wicket.
Simmons made 55 off 39 balls with eight fours and a six while Babar top-scored with 49-ball 61, including six fours and a six.
Later, Colin Ingram was dismissed for 12 while Ravi Bopara remained not out on 13 before Shahid Afridi hit a six off the first and was bowled off the next ball.
Pacer Sohail Khan captured three wickets for 34 for the Lahore Qalandars.