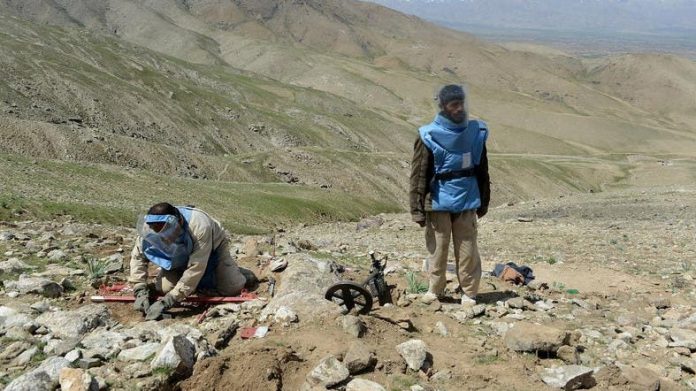 KABUL: A landmine explosion killed nine children in northeastern Afghanistan on Saturday, an official said, amid an increase in civilian casualties in the long-running and brutal war.
The blast happened in volatile Darqad district of Takhar province, when the children stepped on a mine that had been planted on a road in a Taliban-controlled village.
“At 8:30am (0400 GMT) this morning, tragically, nine schoolchildren were martyred in a landmine blast planted by the Taliban,” Jawad Hejri, a spokesman for the Takhar provincial governor, told foreign news agency.
He said the children — all boys — were aged from seven to 11.
No group claimed responsibility for the blast, and the Taliban did not immediately respond to a request for comment.
Last month, the United Nations released a report saying an “unprecedented” number of civilians were killed or wounded in Afghanistan from July to September this year.
The figures — 1,174 deaths and 3,139 injured from July 1 until September 30 — represent a 42 percent increase compared to the same period last year.
The UN laid most of the blame at the feet of “anti-government elements” such as the Taliban, who have been carrying out an insurgency in Afghanistan for more than 18 years.
In May, a landmine killed seven children and wounded two more in the southern province of Ghazni.
A month earlier, seven children were killed and 10 more wounded in the eastern province of Laghman when a mortar shell exploded while they were playing with it.
The insurgents often use roadside bombs and landmines to target Afghan security forces, but the lethal weapons also inflict casualties on civilians.
Years of conflict have left Afghanistan strewn with landmines, unexploded mortars, rockets and homemade bombs — and many are picked up by curious children.