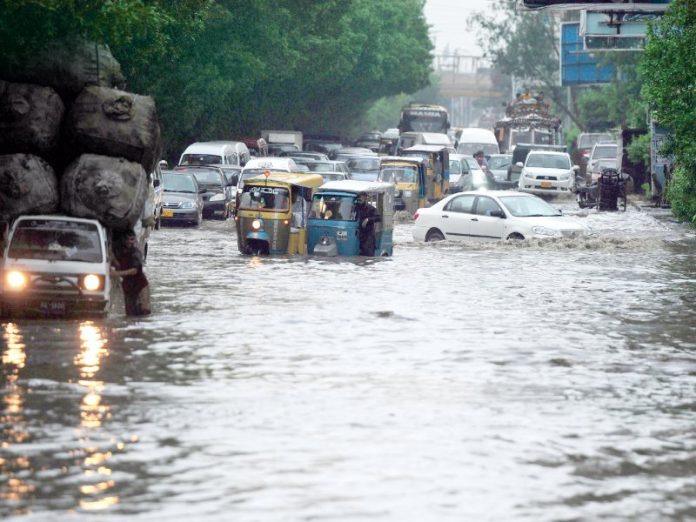 KARACHI: At least 17 people were dead in rain-related incidents on Thursday as torrential downpour continued to lash various parts of Karachi. Most of them were electrocuted in separate incidents.
Thado dam breach has led to thousands of cusecs of water gushing out which has flooded nearby areas including Usman Khaskheli Goth, Amir Bux Goth and Saadi Town.
The city administration has sought the assistance of the Pakistan Army after several areas were submerged after heavy downpours the metropolis.
According to Inter-Services Public Relations, Chief of Army Staff General Qammar Javed Bajwa has assured to provide all possible support to the people of Karachi.
The army chief has also directed that the army will provide water extraction pumps to drain out water from the city and effectively manage the torrential rainfall.
Downpour wreaked havoc on the power supply system and municipal infrastructure as electrocution and falling billboard incidents left at least thirteen people dead in various parts of the city.
The situation further turned even worse due to flooding of low-lying areas as the Meteorological Department forecast new spell of monsoon rain till Friday coupled with thunderstorm.
At 97 mm, North Karachi and surrounding areas of the city witnessed the maximum rainfall within a 12-hour period. According to Director Meteorological Department, rain in Nazimabad was 67 mm, University Road 27 mm, Masroor Base 42 mm, Saddar 40 mm, Landhi 20 mm, Gulshan Hadeed 16 mm, while it was recorded 29 mm at Faisal Base of the city.
Meantime, many areas including Clifton Block 5, North Nazimabad, Gulistan-e-Johar, and Nazimabad plunged into darkness with first drop of rain.
A new monsoon system has entered in Sindh from India that will generate a wet spell with thunderstorm and heavy rainfall, Director Meteorological Department Abdul Rasheed said.
The wet spell in southern parts of Sindh including Mirpur Khas, Hyderabad and Karachi divisions will persist today, till Friday (tomorrow). The weather system will weaken on Friday night.
The cloudy weather however will continue on Eidul Azha, which falls on Saturday.
According to the met office, presently seasonal low lies over north Balochistan. Strong monsoon currents are penetrating southern parts of the country, while moderate currents in upper parts and Kashmir.
National Disaster Management Authority (NDMA) has advised all concerned departments for an update of SMS alert in view of expected flash flooding due to rains and thunderstorm during current week.
According to NDMA, flash floods are likely to impact areas of Sindh and Balochistan provinces.
NDMA has asked the PDMAs of Sindh and Balochistan to coordinate with cellular mobile operators for early dissemination of SMS alert in the areas.
The Met office has warned of urban flooding if necessary arrangements are not taken by the municipal authorities in view of widespread rains. The met officials advised the authorities concerned to ensure cleanliness of storm water drains system of the city to avoid flooding.
Karachi Metropolitan Corporation officials said that with limited resources and power they are trying their best to serve the people and try to provide them with relief at any cost. A senior director for municipal services said all their arrangements had been done, including repair of suction pumps, in order to deal with any emergency.