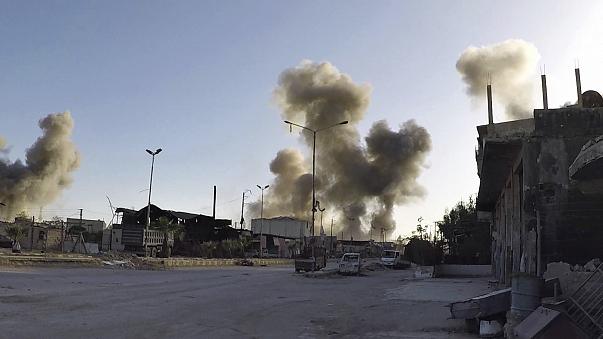 DAMASCUS: At least 70 people have died in a suspected chemical attack in Douma, the last rebel-held town in Syria’s Eastern Ghouta, rescuers and medics say.
The groups — including the White Helmets, the Douma Coordination Committee and the Ghouta Media Center — said toxic gas inside barrel bombs dropped by helicopters over Douma caused people to suffocate and choke.Whereas Syrian state news agency cited an “official source” who denied the allegations, saying the reports were a “blatant attempt to hinder the army’s advance” into what the news agency described as a “collapsing terrorist” stronghold.
The US state department said Russia – with its “unwavering support” for Syria’s government – “ultimately bears responsibility” for the alleged attacks.Several medical, monitoring and activist groups reported details of a chemical attack.
“Seventy people suffocated to death and hundreds are still suffocating,” said Raed al-Saleh, head of the White Helmets.
The pro-opposition Ghouta Media Center tweeted that more than 75 people had “suffocated”, while a further 1,000 people had suffered the effects of the alleged attack.
It blamed a barrel bomb allegedly dropped by a helicopter which it said contained Sarin, a toxic nerve agent.