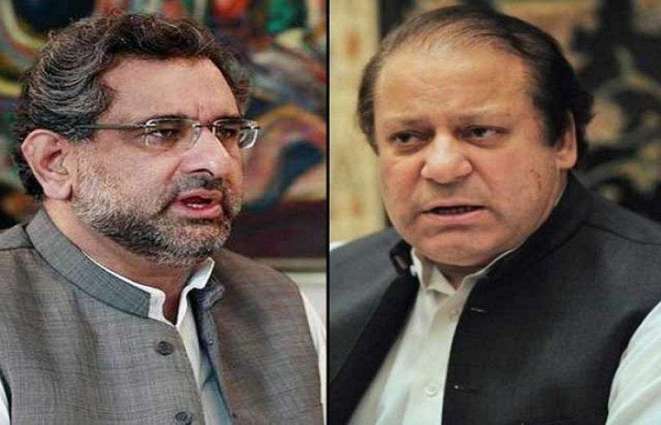 LAHORE: Lahore High Court adjourned the hearing of the high treason case against former Prime Ministers Nawaz Sharif and Shahid Khaqan Abbasi till indefinite period.
Earlier, Shahid Khaqan Abbasi reached Lahore High Court although his Party Supremo Nawaz Sharif was unable to make it since he was busy in hearing of other cases in Islamabad.
According to details, the petitioner, Cyril Almeida said before the court today that the controversial interview of Nawaz Sharif over Mumbai attack has dented the country’s image and sovereignty.
He further alleged that Abbasi shared crucial details of the National Security Council (NSC) meeting with Nawaz following his statements on the 26/11 Mumbai attacks.
Cyril urged the court to take action against Nawaz over Article 5 and 6. He said that if the high court can dismiss someone’s sentence by negating Article 28 and 39 then how can it not hear such a high profile treason case.To this, Lahore High Court Judge Mian Gul Hasan Aurangzeb remarked that these statements are already presented in the petitioner’s application and the court will release its verdict after thoroughly assessing the application.
Nonetheless, LHC adjourned the hearing of the case till indefinite period.
Earlier on October 22, a three-member LHC full bench of Lahore High Court (LHC) headed by Justice Mazahar Ali Naqvi and comprising Justice Atir Mahmood and Justice Chaudhry Masood Jahangir heard the treason petition against Abbasi, Nawaz and journalist Cyril Almeida.
The bench had directed the former premiers to submit a reply in court today regarding the case. However, former premier Abbasi appeared before the bench today but Nawaz failed to.
Justice Mazhar Ali Naqvi questioned why Nawaz did not appear in court and remarked, “He should have been present for the hearing.”
Nawaz’s counsel, Naseer Bhutta responded, “You had summoned a reply which has been submitted.” Justice Naqvi then stated, “Look Abbasi respects the courts and is present today.”