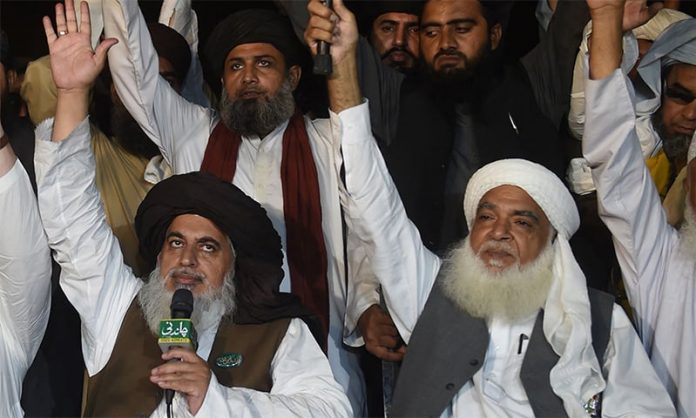 LAHORE: The Lahore High Court (LHC) on Tuesday granted bail to Tehreek-i-Labbaik Pakistan chief Khadim Rizvi and former TLP patron-in-chief Pir Afzal Qadri in a case lodged against them for launching a violent protest against the acquittal of Aasia Bibi from blasphemy charge.
The two firebrand religious leaders have been granted bail against surety bonds worth Rs5 million each.
Qadri, who had been booked under sedition and terrorism charges, had resigned from the TLP on May 1 citing health issues and, on the court’s earlier directions, issued a public apology for his remarks.
The two-member bench, comprising of Justice Qasim Ali Khan and Justice Asjad Javed Gharal granted the bail till July 15.
The high court pronounced the judgement it had reserved on May 10, on bail pleas filed by Rizvi and Qadri, and rejected an apology submitted by Qadri over incendiary remarks made by him during a protest against the Supreme Court’s acquittal of Aasia Bibi.
Rizvi and Qadri were taken into “protective custody” by the state during a crackdown in November 2018 after the TLP announced it would observe martyrs’ day on Nov 25, 2018. The arrests followed weeks after the TLP led three-day protests across the country against Aasia Bibi’s acquittal.
The lawyers from both sides had completed their arguments before the two-member bench, headed by Justice Qasim Ali Khan in the last hearing.
The two leaders moved the high court for bail after an anti-terrorism court in Lahore had rejected their request in a case lodged against them for launching a violent protest against the acquittal of Aasia Bibi.
Civil Lines police had registered an FIR under sections 290/291/353/427/186/188 of Pakistan Penal Code (PPC) and section 6 of the Sound System Punjab Ordinance 2015 against Rizvi and other leaders of the TLP for protests after Aasia Bibi was acquitted by the Supreme Court in October last year. Section 7 of Anti-Terrorism Act 1997 was later added to the FIR.