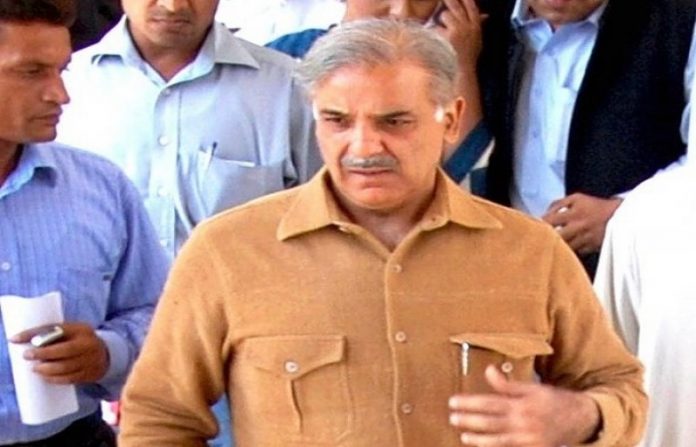 LAHORE: Lahore High Court (LHC) on Wednesday has granted interim bail to Pakistan Muslim League-Nawaz (PML-N) president and opposition leader in National Assembly (NA) Shehbaz Sharif till June 17 in money laundering and assets beyond income cases.
LHC has barred National Accountability Bureau (NAB) from arresting the PML-N leader.
During the proceedings conducted by two-member bench, Shehbaz Sharif’s lawyer Pervez Amjad said that his client attended the court hearing despite being cancer patient. The court asked the PML-N leader whether he fears arrest in the references against him.
Subsequently, the court has directed Shehbaz Sharif to submitted bail bond worth Rs0.5 million and approved his bail plea.
Officials of National Accountability Bureau (NAB) were also present in LHC to arrest the opposition leader in case of bail rejection. PML-N activists and leaders were also gathered outside the court.
On the occasion, the local administration has also ensured stringent security arrangements as water cannons have also been installed to avoid any untoward situation.
On June 1, Shehbaz Sharif had filed a bail plea in LHC to avoid arrest in assets beyond means and money laundering cases.
The opposition leader, in his plea, took the stance that NAB might arrest him in a pending inquiry. The anti-corruption watchdog had prepared the case with malicious intentions as he has been declaring his assets regularly, Shehbaz stated.
The petition, which was filed through Advocate Amjad Pervaiz, stated that Shehbaz Sharif started his business in 1972 and played an important role in agriculture, sugar and textile industries and joined politics in 1988 for the betterment of the society.
Plea further added that NAB had launched an inquiry, under political influence of the current government, with allegations of general nature.
A team of NAB Lahore officials had arrived at the residence of opposition leader Mian Shehbaz Sharif for his arrest but left empty handed.
The action came after PML-N leader had skipped the NAB appearance in assets beyond means and money laundering cases and submitted a response through his representative Muhammad Faisal.
NAB had arrested Muhammad Shehbaz Sharif in the Ashiana-e-Iqbal Housing Scheme scam and Ramzan Sugar Mills case in October 2018 and November 2018 respectively.
He was apprehended during his appearance before NAB in Saaf Pani Company scam. Sources told that three files were tabled before him. The bureau quizzed Sharif regarding a tender awarded to a private consultancy company for a survey of the Saaf Pani company.
The PML-N president had failed to satisfy the probing team of the bureau during the investigation and was ultimately arrested.
The anti-graft watchdog had claimed that the company did not conduct any kind of survey but nevertheless was provided a lucrative sum of Rs 1.5 billion.
In February, 2019, LHC had ordered to release Shehbaz Sharif after approving his bail pleas in Ramzan Sugar Mills and Ashiana Housing Scheme cases.
The bail was granted against two surety bonds worth one million each.