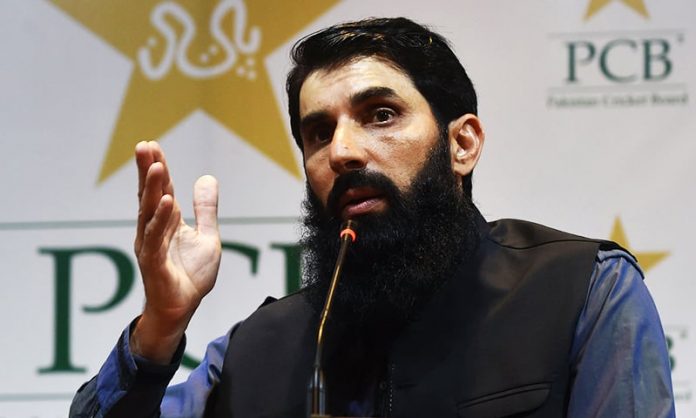 LAHORE: The Lahore High Court (LHC) on Monday issued a notice to the Pakistan Cricket Board (PCB) in a petition against cricket’s head coach-cum-chief selector Misbah-ul-Haq for holding three designations at the same time.
Sources familiar with the matter told the media that the petition pleaded with the court to immediately restrict Misbah from working in the cricket board as he had no experience pertaining to three positions.
Meanwhile, the court has asked the PCB to explain the matter.
Former captain Misbah-ul-Haq has been facing high tides since Pakistan team was whitewashed at home to an inexperienced Sri Lankan team in the Twenty20 series, as media and the fans have been reacting harshly to the defeats.
In early September, ex-skipper Misbah-ul-Haq was named Pakistan’s head coach as well as the chief selector on a three-year contract with pace great Waqar Younis joining him as the team’s new bowling coach.
“It is very humbling for me to join a select group of some of the very best to have coached the Pakistan national sides in the past,” Misbah, who scored over 10,300 international runs in 75 tests and 162 one-dayers, had said in a statement.
“It is an honour and more than that, a massive responsibility as we live and breathe cricket.
“I know expectations are high, but I am absolutely ready and up for the task otherwise I would not have thrown my name in the hat for one of the most challenging and coveted roles in Pakistan cricket.”
“We have exciting young fast bowlers in our ranks and there is no better person than Waqar to transform them into modern day stars,” Misbah had said at that time.
“Both Waqar and I had a candid and frank discussion and we discussed and agreed on a number of things, including roles and responsibilities as well as how to take things forward.”
His first assignment as the new head coach was the limited overs home series against Sri Lanka, which was played from Sept 27 to Oct 9.
Pakistan’s first series as part of the inaugural World Test Championship will be in Australia, where Pakistan will play in Brisbane (Nov. 21-25), followed by a day-night test in Adelaide (Nov. 29-Dec. 3).
Misbah, Pakistan’s most successful and longest serving test captain, retired from international cricket in 2017 after a distinguished career but played for Peshawar Zalmi in this year’s Pakistan Super League Twenty20 tournament.
Perhaps, Pakistan’s most successful Test captain is getting the most arduous lesson of his post-retirement life.