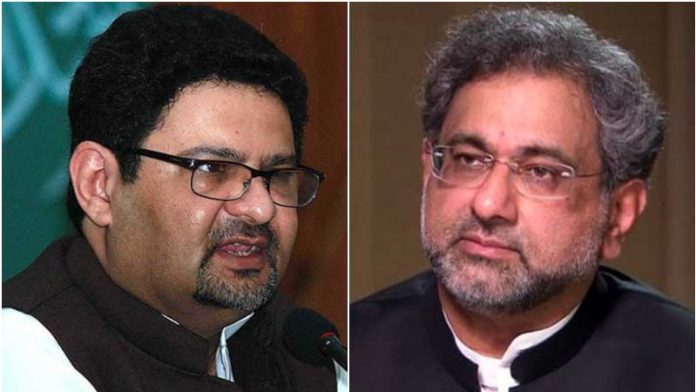 ISLAMABAD: Accountability court on Friday has extended judicial remand of former petroleum minister Shahid Khaqan Abbasi and ex-finance minister Miftah Ismail till October 28 in liquefied natural gas (LNG) scandal.
Talking to media after the hearing, ex-PM Shahid Khaqan Abbasi said that there is no corruption charge against Pakistan Muslim League-Nawaz (PML-N) leaders and that government is registering fake cases in political revenge. The state (government) is becoming dishonest with its own people, he added.
Abbasi claimed that the retired government officers are being threatened to become approver in cases against PML-N. We will continue to bear this injustice against us, he asserted.
Responding to a question related to Jamiat Ulema-e-Islam-Fazal’s (JUI-F) Azadi March, the ex-minister said that decision of participating in the anti-government protest will be taken by senior leadership.
It is to be mentioned here that the apex court on September 10, 2018 directed the NAB to complete the inquiry against Abbasi and others for the alleged corruption in the LNG contract.
As the minister for petroleum and natural resources, he has been accused of granting contract on LNG Terminal to ETPL, Tri-partial agreement, LSA with EETPL and LNG import from Qatar etc.
In June 2018, the NAB approved inquiry against former premier Nawaz Sharif and Abbasi, who was the former minister for petroleum and natural resources at that time, in granting contract of LNG terminal for 15 years to their ‘favourite’ company. It was also observed that this contract had allegedly caused a loss of billions of rupees to the national exchequer.
In January, the NAB interrogated former finance minister Miftah Ismail in the same case.
According to NAB documents, the contract for the LNG import and distribution was awarded to the Elengy Terminal, a subsidiary of Engro, in 2013 in violation of the Public Procurement Regulatory Authority (PPRA) rules and relevant laws.