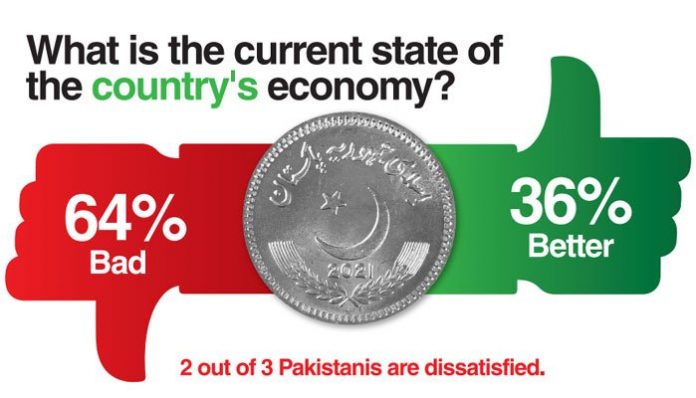 KARACHI: Majority of Pakistanis (73%)  believe that the country is headed in a wrong direction. This was pointed out in the findings of a new opinion poll conducted by the IPSOS from March 18-24, 2021, with a sample size of 1,000 people.

The IPSOS survey found that 62% identified inflation, poverty and unemployment as the biggest issues confronting the masses.

Regarding the country’s overall direction, 23% found nothing wrong with Pakistan’s policies. But around 70% people expressed anxiety over the country’s plight, while 30% found conditions satisfactory.

As many as 41% people were disappointed with the economic conditions and suspected further deterioration. However, 32% expressed a moderate viewpoint, 27% were confident that the economy will improve, another 27% found the economy to be standing on weak foundations while 12% found themselves to be economically better off. But 61% described their economic status to be neither positive nor negative.

The 38% of the overall sample size expressed disappointment over any improvement in economic conditions in the next six months. While 29% hoped the next six months will bring positive change on the economic front. As many as 33% maintained their moderate viewpoint. The IPSOS found as many as 62% identified inflation, poverty and unemployment as the biggest issues confronting the people. In a further breakup, 32% described inflation as the biggest problem, while 20% found unemployment very disturbing and 10% termed increasing poverty as their main worry.

Of those who were asked this question, 16% found coronavirus, 3% corruption and nepotism, and 1% found loadshedding to be the top issue that needs to be addressed.

Inflation was termed the most critical problem across the provinces, where 38% in KP remained most disturbed by the phenomenon, followed by 22% vexed by unemployment, 15% with coronavirus, 7% frustrated with increasing poverty, 5% were found disturbed with corruption and nepotism.

In Sindh, 31% identified inflation as the biggest problem, while 25% were disturbed by unemployment, 14% with the coronavirus pandemic, 9% with increasing poverty, 4% with corruption and nepotism as the top-most issue.

Similarly, in Punjab 31% considered inflation as the biggest problem, while 17% were disturbed with unemployment, an equal percentage with the coronavirus pandemic, 11% with increasing poverty, 4% described increasing taxes as the most troublesome issue of the province.

In Balochistan, 30% said they were frustrated with inflation, while an equal percentage of the people surveyed said they were concerned over the unemployment issue. However,  13% were found to be disturbed with increasing poverty, 10% with coronavirus while only 3% complained about restrictions over the independence of media and censorship of the press.