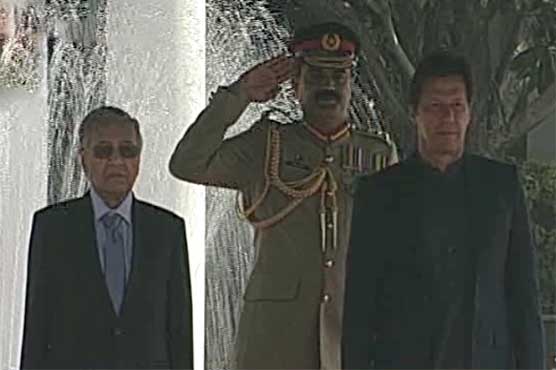 ISLAMABAD: Malaysian Prime Minister Dr Mahathir Bin Mohamad on Friday received guard of honor on his arrival at PM House in Islamabad.
According to details, Prime Minister Imran Khan accompanied his Malaysian counterpart to the PM House where he is scheduled to meet other leaders including Chief of Army Staff (COAS) General Qamar Javed Bajwa and President Arif Alvi. 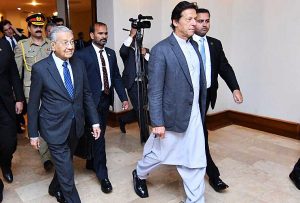 The one-on-one meeting between the two prime ministers will be followed by delegation level talks in which both the sides will discuss ways and means to further bolster their relations.
Pak-Malaysia Business Leaders’ Round Table Conference will be held this afternoon in which the private sector from both the countries would explore opportunities and potential of various sectors of economy for mutual cooperation.
At an investiture ceremony at Aiwan-e-Sadr this evening, the Malaysian Prime Minister will be conferred upon Nishan-e-Pakistan, the highest civil award of Pakistan which will be followed by a banquet in honor of the visiting dignitary and his delegation.
The two prime ministers are scheduled to speak at the roundtable meeting of the chief executive officers, who desire to invest in Pakistan’s automobile and telecommunication sectors.
The Pak-Malaysia Business Leaders’ Roundtable Conference will be held this afternoon, while an investiture ceremony is to be held at Aiwan-i-Sadr this evening. The Malaysian prime minister will be awarded a Nishan-i-Pakistan, the highest civil honour in the country.
A banquet will be held in his honour following the ceremony.
Tomorrow, Mahathir will be the chief guest at the Pakistan Day parade.
Memoranda of Understanding (MoUs) covering $800-$900 million worth of investments with Malaysian investors will be signed today, covering deals in IT, telecom, power generation, textile, agriculture, and halal food industries. More than 25 heads of top Malaysian companies are accompanying the Malaysian prime minister.
Board of Investment Chairman Haroon Sharif said yesterday that joint venture agreements would be signed in the telecom, auto and halal food sectors, adding that after the prime minister’s visit to Malaysia, business-to-business partnership was moving ahead and now is the time to consolidate it.
The visit of Malaysian investors is a signal of a major shift in the present government’s policy to expand economic and trade relations with other countries.
PM’s Adviser on Investment Razak Dawood said yesterday that the advantage of having trade and investment ties with Malaysia would be to enter markets of East Asian countries since Malaysia’s inroad to Asean is much better. Dawood explained that Malaysian investors are long-term players and would like to see a good market share for their country in the region.
Malaysia offers an opportunity for Pakistan to open up the Asean market for trade and investment through strategic partnerships. Asean is a market of estimated 651 million people, with an estimated GDP of $3 trillion and high human development index.
Pakistan is gearing up to tap into one of the largest commercial hubs of the world – Asean, which has goods trade volume of around $2.6 trillion, services of volume of around $703 billion and $136 billion in foreign direct investment.