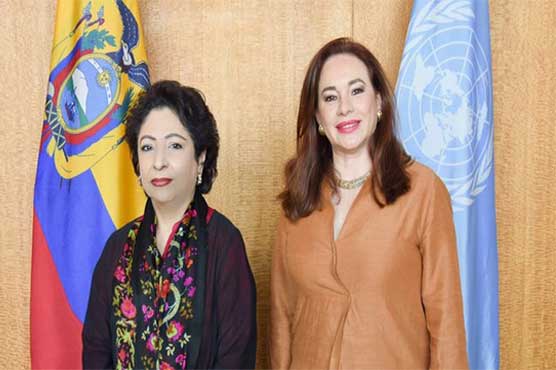 NEW YORK: Pakistan’s permanent representative to the United Nations (UN) Dr. Maleeha Lodhi met President of UN General Assembly Maria Fernanda Espinosa in New York and briefed her in detail about the grave situation in occupied Kashmir.
In a tweet on Tuesday, the representative said that the United Nations should live up to its obligations on Indian occupied Kashmir.
Earlier, Dr Maleeha Lodhi told that India tried to stop the UNSC meeting in New York over Kashmir issue, and its occurrence itself is a major development which supports the fact that it is an internationally recognized dispute.
The members of the UNSC meeting expressed concerns regarding the deteriorating situation in Kashmir. Kuwait’s representative in the meeting mentioned the number of UNSC resolutions over the issue and stressed on their implementation, she added.
She further affirmed that the most important thing is that the voice of Kashmiris was heard at the UNSC meeting which was Pakistan’s first diplomatic step after Indian move of scrapping the valley’s autonomy.
“Pakistan has raised the Kashmir issue at international level, and will move forward after this step. The UNSC session negates the claim that it is India’s internal matter,” the Pakistani representative continued.