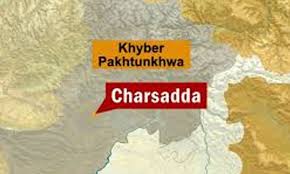 CHARSADDA: In a brutal incident of violence against women, a man killed his wife and five-year-old daughter for not bearing sons in Charsadda’s Shabqadir.
The suspect, identified as Ismail, had registered a case over the disappearance of his wife and daughters on September 4.
He said that his wife, Rabehat, had gone to the doctor’s office with their two daughters, five-year-old Dua and seven-month-old Fajr, but never returned.
The police found the bodies and an unconscious Fajr in a field in Bagram on September 7. The infant survived four days and three nights in the field.
The deceased woman’s brother had registered a case.
During the investigation, Ismail confessed to strangling Rabehat and Dua.
The 35-year-old, who has been married twice, said that he killed his wife because she could not bear him any sons.
The couple had six daughters together. The suspect has been arrested and further investigation is under way.