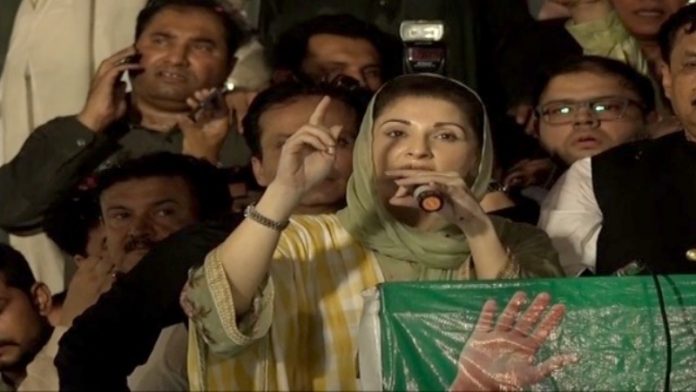 MANDI BAHAUDDIN: Pakistan Muslim Lague-Nawaz (PML-N) Vice President Maryam Nawaz on Sunday asked Prime Minister Imran Khan to “tender his resignation and go home”.
Addressing a mammoth rally in Mandi Bahauddin, Maryam said the ruling party was afraid of her and didn’t grant the PML-N permission to hold the rally.
Maryam Nawaz said that keeping former prime minister Nawaz Sharif in jail will be a crime now, following yesterday’s “evidence” alleging that his sentencing had been given under “immense pressure from hidden hands”, a claim rejected today by the presiding judge.
In her address, which was held on Jail Road, she claimed that Nawaz “will be released, and will become prime minister once more — but this time more powerful than ever before”.
“It took me 10 hours to cover a distance of 2-and-a-half hour,” she added.
The ruling party even banned the use of word “selected” in parliament, Maryam said, as her supporters chanted “Go selected Go” at the rally.
“Nawaz Sharif you have won,” she said, referring to a video of Judge Arshad Malik that was made public by the PML-N on Saturday.
Maryam Nawaz, during an explosive press conference on Saturday, had claimed that the judge was blackmailed into convicting Nawaz without any evidence and had admitted that. According to her, Judge Malik called PML-N leader Nasir Butt to his house himself to clear his conscience and she showed a video clip from their meeting.
“In the video, the judge can be heard explaining that in order to make any instrument work it is necessary to tighten its screws. You can make any sound come out of the instrument as per your will,” Maryam had quoted the judge as saying in the video. She had then shown another clip in which Judge Malik allegedly claimed that Nawaz did not commit any corruption.
Maryam had claimed that the judge had said that “in this case, there are no allegations of financial corruption, illegal gratification, commissions or kickbacks were received by the accused [Nawaz Sharif] or were paid by any person or department”.
“Innocent Nawaz Sharif must be very proud of you,” she told workers at the rally.