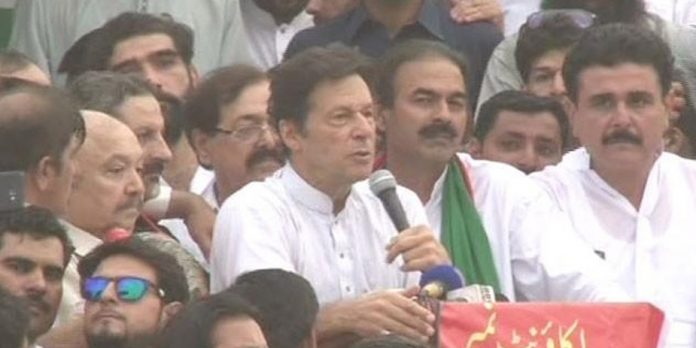 LAHORE: Pakistan Tehreek-e-Insaf Chairman Imran Khan on Thursday claimed that July 26 would dawn with a new Pakistan after victory of the PTI in general election.
Addressing a public gathering in NA-131 Constituency Lahore, he claimed the masses would vote for the PTI to ensure rule of law in the country on July 25.
He pledge the PTI would uplift lives of the poor in the country, adding that the youth would be provided employment and the best modern education would be given to children at government schools across the country.
Quoting an example of China, he said that China uplifted more than 700 million poor people in just three years.
Imran vowed to raise living standard of people after providing them all possible facilities of life at their doorsteps besides ensuring rule of law after winning general election.
He said that the state was custodian of lives of the people and it protected property and lives of its citizens.
“State is responsible for bread and butter of the people in the West,” he maintained.
He said that Shaukat Khanum Hospital was providing free health facilities to 75 per cent of patients, adding that 90 per cent students were studying on scholarship at the NUML University in Mainwali.
He pledged that humanity would prevail in the country and claimed that the PTI would convert the country according to the dreams of Dr Allama Muhammad Iqbal.
Imran claimed that farmers would get 100 per cent reward of their hardwork during his government.
He claimed that no one would be allowed to plunder money of the people and the PTI would bring back the looted money from other countries.
He urged the people to vote the PTI for true democracy and for prosperity of the country.
Imran claimed the PTI would end corruption in the country and his party would bring about reforms in all sectors, including agriculture, health and education. – APP