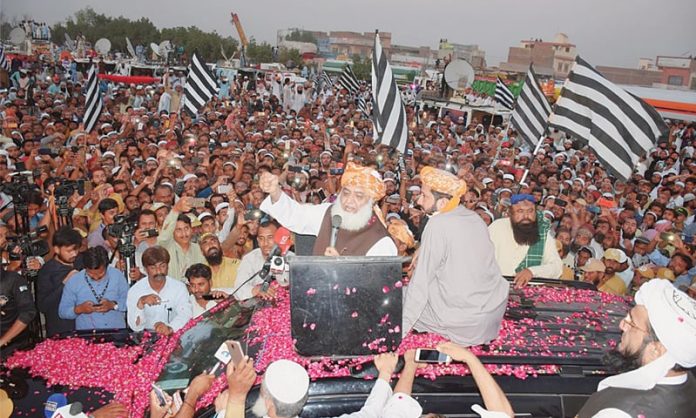 KARACHI: Jamiat Ulema-e-Islam-Fazl (JUI-F) chief Fazlur Rehman, after spending a night in Larkana citing security threats, has resumed the opposition’s long march being called as ‘Azadi March’ on Monday afternoon.
After spending a night in Sukkur, marchers on Monday morning were served with chickpea curry and rotis before moving on to the next point of stay towards Islamabad.
Following the nearly inflexible negotiations with the government on Saturday night, the Azadi March began from Karachi where the JUI-F finalised arrangements to kick off massive demonstrations against the ruling Pakistan Tehreek-e-Insaf (PTI).
The march en route to Islamabad took public attention all the way through Hyderabad, Hala Mutyari, Nawabshah and Khairpur reached Sukkur yesterday. Following Fazl’s instructions, it will move towards Pano Aqil and Ghotki to enter Punjab.
Thousands of people, including seminary students, are participating in the march. In addition, convoys of political parties, including the PPP, the PML-N, the Awami National Party (ANP) and others, have joined the march.
Yesterday, Pakistan Peoples Party (PPP) representatives Saeed Ghani, Raza Rabbani, Awami National Party (ANP) leaders including Shahi Syed, Pakistan Muslim League-Nawaz (PML-N) senior leader Muhammad Zubair and many other politicians belonging to different political parties were present in the caravan of Fazl to express their support for Azadi March.
The PPP has expressed full support for the massive demonstration being launched from Sindh – the province the party has been ruling since 2008.
PML-N President Shehbaz Sharif held a telephonic conversation with Fazlur Rehman to discuss the next course of action. Shehbaz congratulated Fazl over successful conduct of March.
Azadi March under the leadership of JUI-F chief Maulana Fazlur Rehman will enter in Islamabad on October 31 where he will hold a massive demonstration in H-9.
Yesterday, the march proceeded to the Superhighway (M9) after smaller demonstrations emerged from the city’s six districts and gathered at Sohrab Goth where the JUI-F flexed its political muscles.