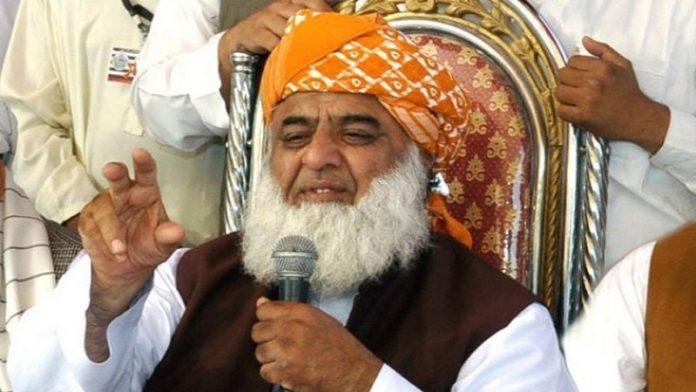 PESHAWAR: Maulana Fazlur Rehman, the head of the Pakistan Democratic Movement (PDM), claimed on Friday that state institutions favoruing Imran Khan, the previous prime minister, ousted in April though vote of no confidence.

Addressing a news conference in Peshawar, he said that Pakistan Tehreek-e-Insaf (PTI) offered nothing to the youth except abusive words.

He claimed that the political party received funding from India and Israel and demanded the Election Commission of Pakistan (ECP) to announce the verdict in the foreign funding case against PTI without any delay.

He called Imran Khan a ‘Fitna’ and vowed to fight against him in every corner of the country. Everybody is a witness that he (Imran Khan) handed over Punjab to a man he once called the biggest thief, PDM chief said.

Maulana Fazl asked the judges and generals to resign and play politics in the ‘ground of politics’ instead of maligning their institutions.

That way; they (judges and generals) would know their real value, he added.

He said that Imran Khan’s narrative is standing on a lie, adding that the National Assembly (NA) speaker has started accepting resignations of PTI’s lawmakers and soon by-elections will be held to fill the vacant seats.

Maulana Fazl said that the PDM has unanimously decided to complete the term in the center. We will go to the elections after reforms, he added.