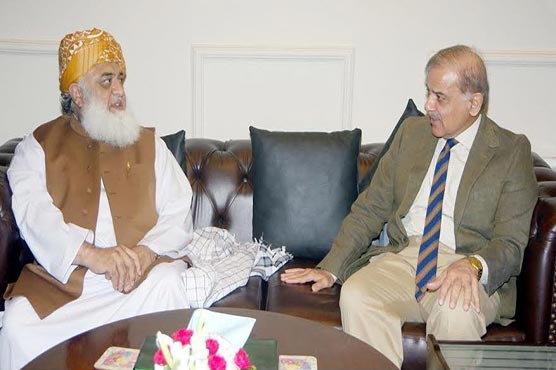 ISLAMABAD: Jamiat Ulema-e-Islam-Fazl (JUI-F) chief Maulana Fazlur Rehman will meet Pakistan Muslim League-Nawaz (PML-N) president and Opposition Leader in National Assembly (NA) Shehbaz Sharif today (Friday) to discuss Azadi March.
According to details, Shehbaz Sharif will announce his party’s strategy over anti-government protest after the meeting.
Earlier, JUI-F chief Maulana Fazlur Rehman said that there will be no talks with the incumbent government of Pakistan Tehreek-e-Insaf (PTI) till the resignation of Prime Minister (PM) Imran Khan.
He told that the government has not contacted him for negotiation. However, now, the time for talks on Azadi March has also passed, he added.
PM Imran Khan had decided to form a committee that will be headed by Defense Minister Pervaiz Khattak for dialogues with JUI-F chairman Maulana Fazlur Rehman. The decision was taken during the meeting of PTI’s core committee.
JUI-F Chief Maulana Fazal-ur-Rehman had announced that his party’s anti-government ‘Azadi March’ to Islamabad will take place on October 31 instead of October 27.
“We have decided to enter Islamabad on October 31,” he said, adding that marchers will express solidarity with Kashmiris on Oct 27 and then leave for the federal capital.
“People from all over the country will enter Islamabad at the same time, he told.
Maulana Fazal-ur-Rehman said he will announce the next plan of action himself after reaching Islamabad. The protests will be staged nationwide if Azadi March is stopped, he stressed.