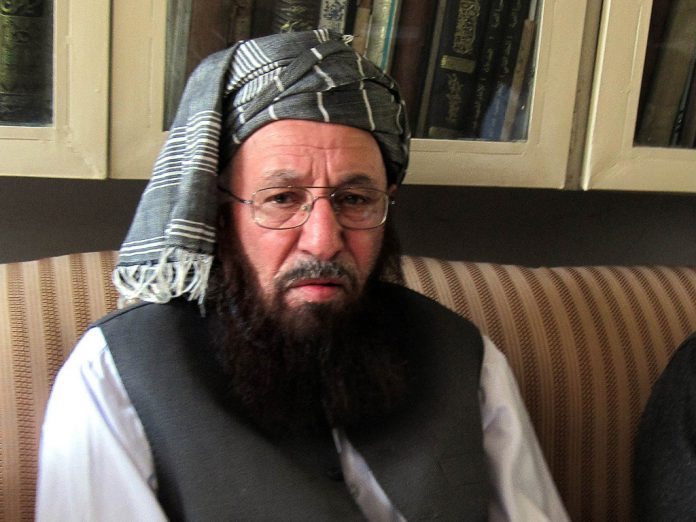 NOWSHERA: Jamiat Ulema Islam-Sami (JUI-S) Chief Maulana Sami ul Haq funeral prayers will be held at Garrison Ground in Akora Khattak at 3pm today (Saturday).
The body of the slain JUI-S chief, who was stabbed to death by unknown assailants at his residence in Rawalpindi on Friday evening, has been transported Akora Khattak through an ambulance. He would be laid to rest in his native town Nowshera in the Khyber Pakhtunkhwa Province.
Talking to media Hamid ul Haq, son of former senator Maulana Sami ul Haq, confirmed that his father was assassinated in his room, demanding the early arrest of the perpetrators.
The investigation team has prepared the initial report on the assassination of Maulana Samiul Haq and forwarded it to the concerned authorities
Report says, JUI-S chief was alone at his residence in the Safari Villas Housing Society, whereas his servant had gone to market for purchasing grocery. On his return, he saw the Maulana lying injured beside the bed with stab wounds. Blood was also found on the bed.
Meanwhile, Prime Minister Imran Khan has condemned the assassination of Maulana Samiul Haq, stating that the country had been deprived of an important religious leader. He said that Haq’s services would always be remembered.
The prime minister sought a report and directed that an investigation be carried out immediately to find the perpetrators.
Condemning the murder of Sami ul Haq, JUI-F Chief Maulana Fazl-ur-Rehman said: “I myself was a student of Darul Haqqani for eight years. I extend my condolences to his relatives.”
Punjab Chief Minister Usman Buzdar also denounced the assassination and sought a report from the Inspector General Punjab Police.
Former prime minister Nawaz Sharif condemned the martyrdom of the JUI-S chief and expressed immense grief over it.