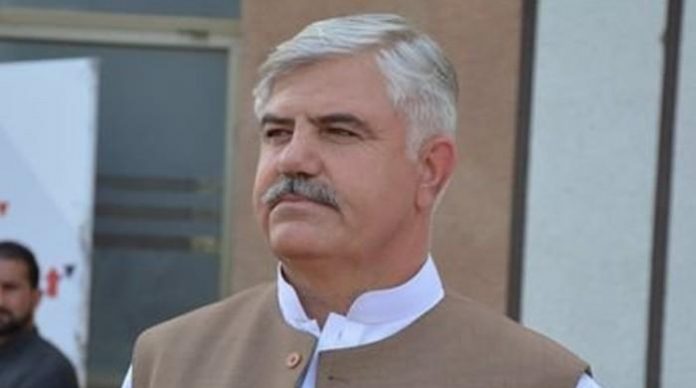 PESHAWAR: Mehmood Khan of Pakistan Tehreek-e-Insaf (PTI), the newly-elected Chief Minister of Khyber Pakhtunkhwa, will take oath of his office today (Friday).
Governor Khyber Pakhtunkhwa, Iqbal Zaffar Jhagra, will administer the oath to the new chief minister in a ceremony to be held at the Governor House Peshawar at 3:00pm today.
Earlier on Thursday, Mahmood Khan was elected as new Chief Minister of Khyber Pakhtunkhwa (KP) for next five year today by securing 77 votes. Opposition’s candidate Mian Nisar Gul remained second with 33 votes.
Mehmood Khan was born in Matta Tehsil of Swat in 1972. He got early education from Government Primary School and then obtained certificate of Matriculation from Peshawar Public School.
He did his masters from Agriculture University of Peshawar.
From 2007 to 2012, he had been Nazim Union Council Khariri of Tehsil Matta. He is a prominent politician from Swat who was elected as MPA on PK-9 in 2013.
He held portfolios of sports, culture, and irrigation in the cabinet of Pervez Khattak.
He has also been KP irrigation and home minister but for a very brief period of time. In general election 2018, he bagged 25,697 votes from PK-9. He is the President of PTI Malakand Division.