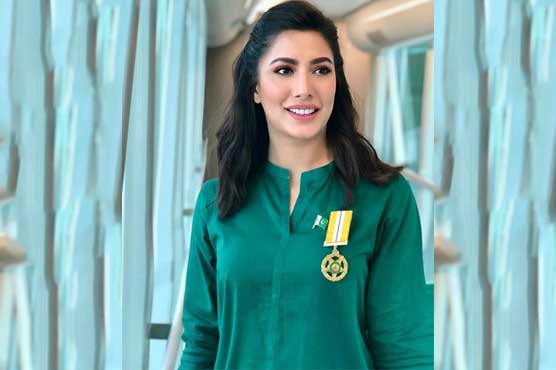 ISLAMABAD: Proudly wearing the Tamgha-i-Imtiaz, Mehwish Hayat celebrates the prestigious honor with her mother Rukhsar Hayat.
Reflecting back, Mehwish Hayat tells her story of fascination with the glamour world while visiting the PTV studios with her mother, holding tightly onto her hand at the tender age of 8, bewitching her from the very beginning, till this day of her donning the Medal of Excellence, once again entering the President House holding onto to her mother’s hand is a dream come true.
She gives a message of hope to all the girls who dare to dream, encouraging them to keep trying and striving with a conviction that one day those very dreams will wear the feathers of reality and help them soar high up in the sky.
‘An eight year old girl went to the PTV studios holding her mother’s hand tightly. She was totally clueless about all the hustle and bustle going on around her. But she was equally fascinated by the lights, the cameras and the way in which everybody was hard at work including her mother who was an actress. Even as a child the wobbly sets amused her but she could see on the screens the magic being woven in that studio creating dreams for so many people. Yesterday that same little girl arrived at the Aiwan e sadr holding tightly on to her mother’s hand equally bemused by her surroundings. That girl knows that she is blessed to be there receiving such a prestigious honour in the company of such distinguished people following in the footsteps of so many legends, so many of her own heroes. At heart she remains that simple little girl from Karachi who has been fortunate to live her dreams. Her journey from that PTV studio to the Awan-e-sadr has been a long one and by no means the easiest. But never in her wildest dreams did she see this recognition coming at such a tender age. Nor did she see the role she would go on to play in the revival of Pakistani Cinema and her contribution being acknowledged in this way…!
Thank you to the Government of Pakistan and the President for bestowing this honour upon me and making the dream of that little girl come true. Today, I share this with all the other girls in Pakistan who have a dream, to them I simply say, “Hope lies in dreams, in imagination, and in the courage of those who dare to make dreams turn into reality.” Thank you also to all my family, friends and colleagues who have shared this wondrous journey and above all to all the fans who have supported me each step of the way and made me worthy of this award!,’ she added.