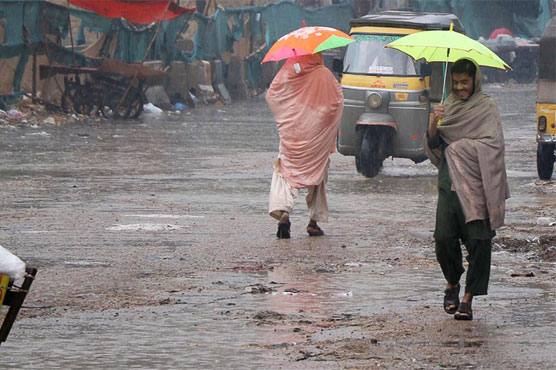 ISLAMABAD: Pakistan’s met office has predicted another round of thundershowers and snowfall in various parts of the country from Tuesday (tomorrow).
According to the Pakistan Meteorological Department, continental air is prevailing over most parts of the country. Another westerly wave is likely to approach western parts of the country on Monday (today) and likely to grip upper parts on Tuesday and may persist till Wednesday. Several areas will brace for another round of thundershowers and rainfall.
After rainfall in different cities in Balochistan the mercury has further dropped in the region.
Mainly cold and dry weather is expected in most parts of the province.However, rain ( snowfall over the hills) is expected at scattered places in Quetta, Kalat, Zhob and Makran divisions. Moreover Malakand division, Gilgit-Baltistan will also expected to receive rainfall.
Intense cold prevails in the valleys of Northern Areas as minimum temperature at Skardu remained -10.
Chagai and Dalbandin districts in Balochistan received rainfall yesterday, as the temperature dropped further in the region.
The met office has predicted rainfall on Tuesday in Sukkur, Larkana, Islamabad and several districts of Punjab and Khyber Pakhtunkhwa provinces, while snowfall is expected at the hills of Gilgit-Baltistan and Azad Kashmir.