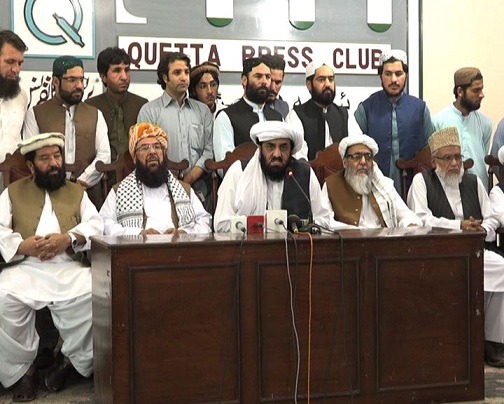 QUETTA: The Muttahida Majlis -e-Amal (MMA) on Wednesday demanded of the Election Commission of Pakistan (ECP) to replace all the four provincial governors ahead of the upcoming general elections.
Leaders of MMA including Jamiat Ulema-e-Islam General Secretary Maulana Ghafoor Haidery, former senator Hafiz Hamdullah and others held a press conference in Quetta where they said that incidents that occurred during the 2013 elections seem to be springing up again but the MMA is not one to cower.
They said that the MMA will try to form a government. They said that in the next election, they will form the government and impose an Islamic system of government.
Hamdullah said that before the elections, plans to rig the polls were made. He claimed that the Governor House in Quetta had become one political party’s media cell.
With the caretaker set up and governor in place, clean elections are not possible, he said. This means all four provinces should get new governors.

Ketch: A Soldier embraced martyrdom and five other injured in an attack