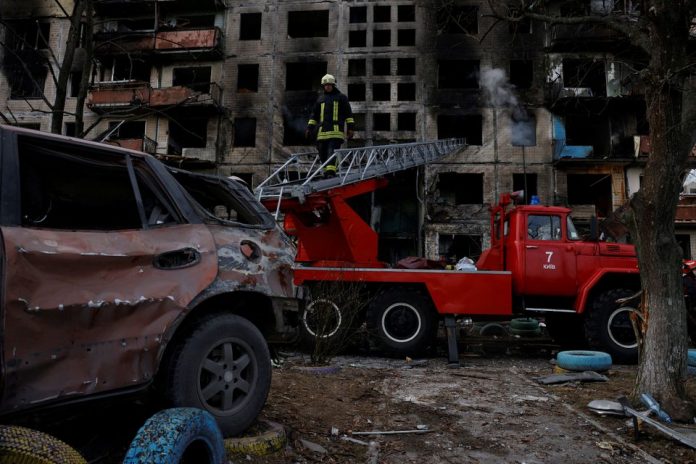 LVIV, Ukraine, March 14 (Reuters) – Diplomatic efforts to end the war in Ukraine were gearing up on Monday, with Ukrainian and Russian negotiators set to talk again after both sides cited progress, even though Russia attacked a base near the Polish border and fighting raged elsewhere.

A barrage of Russian missiles hit Ukraine’s Yavoriv International Centre for Peacekeeping and Security, a base just 15 miles (25 km) from the Polish border that has previously hosted NATO military instructors, killing 35 people and wounding 134, a Ukrainian official said on Sunday.

Russia’s defence ministry said up to 180 “foreign mercenaries” and a large number of foreign weapons were destroyed. Reuters could not independently verify the casualties reported by either side.

Thousands of people have died since Feb. 24, when Russian President Vladimir Putin launched what he called a special military operation to rid Ukraine of dangerous nationalists and Nazis.

The United States, which had watched Russia’s build-up on Ukraine’s borders with mounting alarm for weeks, says it was a premeditated, unjustified and unlawful “war of choice”.

In a telephone call, U.S. President Joe Biden and France’s Emmanuel Macron underscored their commitment to holding Russia accountable for the invasion, the White House said.

Hopes were boosted after Russia and Ukraine gave their most upbeat assessments following weekend negotiations.

“Russia is already beginning to talk constructively,” Ukrainian negotiator Mykhailo Podolyak said in a video online. “I think that we will achieve some results literally in a matter of days.”

Ukraine said talks via video were set to start at 10:30 a.m. (0830 GMT). Neither side has said what they would cover. Three rounds of talks in Belarus, most recently last Monday, had focused mainly on humanitarian issues.

Ukrainian President Volodymyr Zelenskiy said the countries’ delegations had been speaking daily by video link and a clear aim of his negotiators was to “do everything” to arrange for him to meet Putin.

“We must hold on. We must fight. And we will win,” Zelenskiy said in a late night video speech.