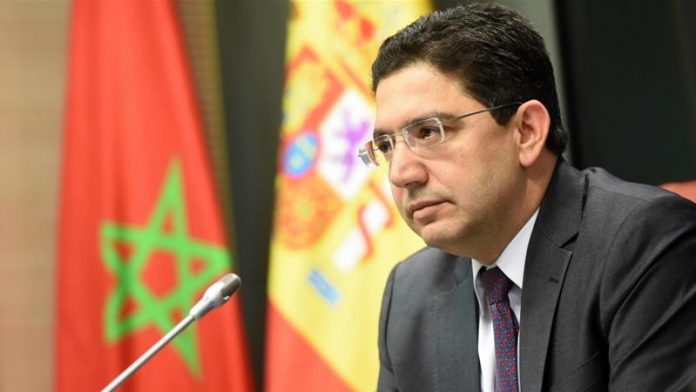 RABAT: Morocco has announced it will cut diplomatic ties with Iran over Tehran’s support for the Polisario Front, a Western Saharan independence movement.
Morocco’s foreign ministry said on Tuesday it will close its embassy in Tehran and expel the Iranian ambassador in Rabat over Iran’s support for Polisario.
Rabat accuses Tehran and Lebanese proxy Hezbollah of training and arming Polisario Front fighters.
Morocco’s foreign affairs minister, Nasser Bourita, told foreign news agency that Rabat has evidence that incriminates the Iranian government, which assisted Hezbollah in providing financial as well as logistical support to Polisario through its embassy in Algiers.
Bourita said he presented the evidence to his Iranian counterpart earlier in the day in Tehran, which included documentation of arms deliveries made to the rebel group.
“This month Hezbollah sent [surface-to-air] SAM9, SAM11 and Strela missiles to the Polisario with the connivance of Iran’s embassy in Algiers,” he told reporters.
“Morocco was left without a choice but to act and cut diplomatic ties and close its embassy in Tehran.”
Bourita said he had just returned from Iran after informing it of Morocco’s decision to sever relations. Rabat’s ambassador has already returned home and Iran’s charge d’affaires was expelled on Tuesday with immediate effect, he said.
There was no immediate Iranian reaction to the Moroccan move or accusation. Iran has backed Polisario in the past.
Hezbollah denied in a statement it was training and arming Polisario and said Morocco had taken its decision under “American, Israeli and Saudi pressure”.
The Western Sahara region is split by an earthen wall where territory east of structure falls under the Algerian-backed Polisario Front.
Spain relinquished control of the territory in 1975 that was subsequently claimed by Mauritania, Morocco and Polisario.
Mauritania, however, withdrew its claim to the territory and proceeded to recognise the Sahrawi Arab Democratic Republic in 1984.
UN efforts have repeatedly failed to broker a settlement over the disputed territory that Polisario says belongs to the Sahrawi people.
Morocco, which controls 90 percent of the territory including its three main towns, insists it is an integral part of the kingdom and only semi-autonomy is on the table. Polisario demands a referendum on self-determination be held.
In 2009, Rabat broke diplomatic links with Tehran after an adviser to Iran’s Supreme Leader Ayatollah Ali Khamenei said Iran had sovereign rights over Bahrain.
Morocco’s foreign ministry also accused Iran at the time of attempting to spread Shia Islam in the predominantly Sunni kingdom. – Agencies