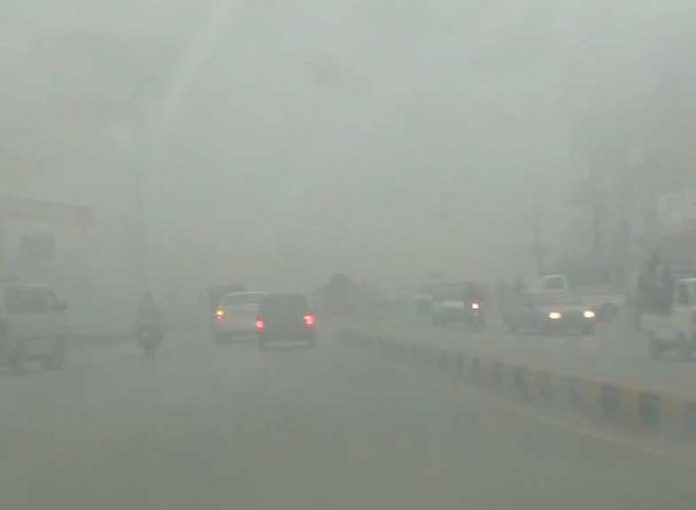 ISLAMABAD: Dense fog has blanketed several cities of Khyber Pakhtunkhwa and Punjab on night between Sunday and Monday, badly disrupting the road traffic and flight schedules.
Thick fog has blanketed Peshawar, Mardan, Charsadda, Nowshera, Swabi and other cities of Khyber Pakhtunkhwa. Peshawar-Rashakai Motorway section (M1) has been also closed for all kind of traffic due to dense fog.
Severe fog has also engulfed Tokar Niaz Baig, Sagian Pull, Canal Road and Babu Sabu areas of Lahore, Faisalabad, Phool Nagar, Manga Mandi and Pattoki.
Dense fog has disrupted flight schedule at the Lahore’s Allama Iqbal International Airport and flight operation was suspended as visibility was less than 50 metres. International flights have been diverted to other cities whereas flights taking off from Allama Iqbal International Airport have been cancelled.
Motorway’s section from Lahore to Pindi Bhattian (M2), from Faisalabad to Pindi Bhattian and from Faisalabad to Gojra has been closed for all kinds of traffic as visibility was very low due to dense fog.
The Motorway police have appealed the drivers to use GT Road for travel from Lahore to Sheikhupura. The Motorway police have also urged the drivers to drive slowly and switch on fog lights. They also requested people to stay home and avoid unnecessary travelling.