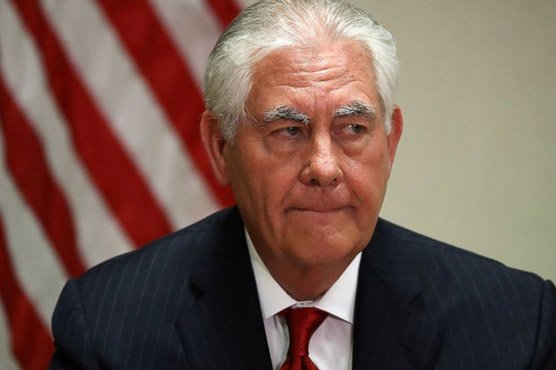 PARIS: US Secretary of State Rex Tillerson said Friday that the relocation of the US embassy to Jerusalem would probably not take place for at least two years.
“This is not something that is going to happen this year or probably not next year, but the president does want us to move in a very concrete and steadfast way to ensure the embassy is located in Jerusalem when we re able to do so, at the earliest possible time,” Tillerson said after talks in Paris with French Foreign Minister Jean-Yves Le Drian.
Listing the steps involved in moving the embassy from Tel Aviv, Tillerson said the United States needed to acquire a site, develop plans, receive congressional authorisation for the spending “and then actually building the embassy”.
He reiterated that the move was not intended to prejudge the outcome of future peace talks between Israel and the Palestinians.
“The president in his statement… did not indicate any final status for Jerusalem. In fact he was I think very clear that the final status, including the borders, would be left to the parties to negotiate and decide,” he added.
His remarks came as the fallout from President Donald Trump s decision to unilaterally recognise Jerusalem as Israel s capital — renouncing nearly seven decades of US foreign policy — continued to reverberate, with Palestinians staging a “day of rage”.
Tillerson also met President Emmanuel Macron, who has joined a host of world leaders in condemning the move.