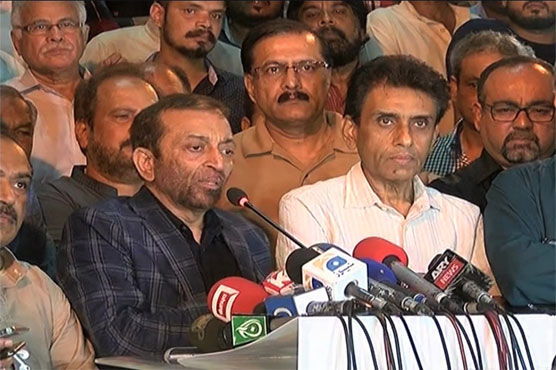 KARACHI: Both factions of Muttahida Qaumi Movement-Pakistan (MQM-P) on Wednesday night announced to hold joint public meeting in Liaquatabad area of Karachi on May 5.
Addressing a joint press conference at MQM Bahadurabad office, Muttahida Qaumi Movement-Pakistan s PIB Colony chief Farooq Sattar and Bahadurabad faction’s Khalid Maqbool Siddiqui announced to hold a joint public meeting at Tanki Ground in Liaquatabad on Saturday (May 5).
Farooq Sattar critically criticized Pakistan People’s Party and said that it is their government’s treatment of Mohajirs which has united the community once again.
Speaking on the occasion, Khalid Maqbool Siddiqui said that this will be a historic public meeting which will show the emotions of Mohajir community.
Earlier, Dr Farooq Sattar along with his supporters arrived at the MQM Bahadurabad faction office where he was received by Faisal Sabazwari and other party leaders.