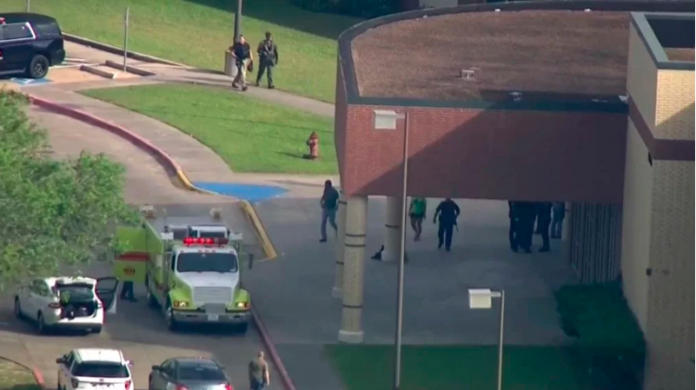 CHICAGO: Multiple people were killed when a gunman opened fire at a Texas high school on Friday, US media reported, as President Donald Trump said the situation was “not looking good.”
The incident took place at Santa Fe High School in the city of the same name, located about 30 miles (50 kilometers) southeast of Houston.
A reporter for CBS affiliate KHOU cited three sources saying that at least eight students at Santa Fe High School were killed. NBC’s Houston affiliate KPRC reported the same toll. CNN reported “multiple fatalities,” citing unnamed sources.
“School shooting in Texas. Early reports not looking good. God bless all!” Trump tweeted.
The sheriff of Harris County, Ed Gonzalez tweeted: “One is in custody, a second one detained. An injured police officer is being treated, the extent of his injuries are unknown.”
Earlier, the school assistant principal, Cris Richardson, told CNN that one suspect was in custody.
“This morning, an incident occurred at the high school involving an active shooter. The situation is active, but has been contained. There have been confirmed injuries,” the Santa Fe school district said in a statement.
“Law enforcement will continue to secure the building and initiate all emergency management protocols to release and move students to another location.”
Other schools in the district were not affected, it added.
“There was someone that walked in with a shotgun and started shooting, and this girl got shot in the leg,” an eyewitness identified as Nikki told local television station KTRK.
The shooting was the latest in what has become an all-too-familiar situation in American schools, with shootings a near-daily occurrence.
Earlier this year, 17 students and staff were killed in a shooting at a Florida high school — a massacre that prompted survivors to launch a grassroots campaign against gun violence. – APP